President Romana has been called to account for her actions. But the only evidence that she has responded to a real and present danger has disappeared. To clear her good name she is dependent on the testimony of the very people who want to see her publically humiliated and her power removed. 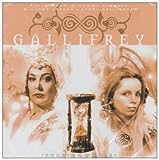