The TARDIS becomes caught in a Charged Vacuum Emboitment, a hole in the fabric of space, and is drawn into E-Space, a smaller universe which coexists with our own.

The first planet the Doctor and Romana arrive on is Alzarius, a seemingly idyllic world of flora and fauna supporting a happy and contented people. The Terradonians are misplaced from their own world as their Starliner crashed on Alzarius fifty years before. They live on the planet now, whilst all the time making repairs to the ship in readiness to leave.

The colony is run by three Deciders - Exmon Draith, Ragen Nefred and Jaynis Garif - who periodically check on the people living outside the ship. There is also a small group of Outlers, youngsters led by Varsh who have rebelled against the elders of the colony and who live apart from the others in a cave, stealing what little they need.

The arrival of the Doctor and Romana coincides with Mistfall, a periodic event spoken about in the Terradonians' history, when the normally harmless river-fruit they harvest hatch venomous spiders and misshapen monsters rise from the misty marshes to attack the colony.

The Deciders evacuate everyone back to the Starliner as the Marshmen arise and begin to advance on the colony.

It is the Doctor who works out the truth: the Terradonians all died when they first arrived, and the people who now think of themselves as Terradonians are in fact evolved Marshmen. Mistfall is just a part of the planet's ecological process, and the spiders and attacking Marshmen will eventually evolve into the humanoids who now run the ship. He further deduces that the ship has been ready for take off for years; the problem is that none of the Deciders will face up to the awful knowledge that they simply don't know how to leave.

With the Doctor's help, the humanoid Alzarians leave the planet in the Starliner. Adric, one of the Outlers, stows away on board the TARDIS rather than leave with his people. 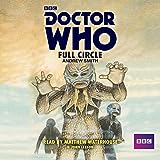