Donna is determined to find the Doctor again - even if it means braving the villainous Miss Foster and her hordes of sinister Adipose. 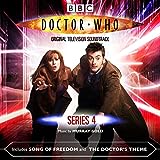