The Ambassadors of Death

UNIT are present at the Space Centre, where Professor Ralph Cornish (Ronald Allen) is in charge, monitoring a recovery capsule that has been sent up to rendezvous with Mars Probe 7, with which radio contact has been lost. The Doctor and Liz watch a live television broadcast as Charlie Van Lyden (Ric Felgate) in Recovery 7 links up with the Mars Probe. There is suddenly a loud burst of noise which the Doctor recognises as being a message. He and Liz head for the Space Centre.

The message is repeated and then there is a further burst of noise. This is the reply and the Doctor gets UNIT to set up world wide triangulation to find the source should the reply be repeated. It is tracked to an abandoned warehouse about seven miles from the space centre. Transmitting the reply is Carrington (John Abineri) who escapes from the warehouse as UNIT arrive and fight with some hired thugs.

Back at the Space Centre, Doctor Bruno Taltalian (Robert Cawdron) pulls a gun on the Doctor and orders him to hand over a tape recording of the message and reply. The Doctor refuses - making the tape vanish for several seconds by 'transmigration of object' - and Taltalian escapes when the Brigadier enters. Meanwhile Recovery 7 separates from Mars Probe 7 and starts its return to Earth. The Doctor finds that he cannot decode the message as the computers have been sabotaged by Taltalian. The capsule comes down in Southern England and it is brought back to the Space Centre.

The Doctor and the Brigadier go to see Sir James Quinlan (Dallas Cavell) to complain that their investigations are being blocked at every turn, but Quinlan is in league with Taltalian. When the Recovery 7 capsule is finally opened, it is empty. The Doctor learns that there was a fake security alert when the capsule was unguarded by UNIT and that the astronauts have been removed. Liz notes that the interior of the capsule is highly radioactive.

The astronauts are currently being looked after by Professor Heldorf (Gordon Sterne) under instruction from Carrington. Quinlan introduces the Doctor and the Brigadier to General Carrington, a former astronaut on Mars Probe 6. Carrington explains that the astronauts are suffering from a new form of infectious radiation and are being held in secret to prevent panic by himself and Quinlan. A disbelieving Doctor demands to see the men. Meanwhile, a thug called Reegan (William Dysart) removes them from Heldorf's lab, leaving the scientists dead. When the Doctor arrives, he realises from the radiation readings that the astronauts who returned from space are alien and that the human pilots are therefore still in space.

The alien astronauts have now collapsed and are being looked after by Doctor Lennox (Cyril Shaps) who reluctantly 'feeds' them more radiation. They start to recover. Reegan is told to 'deal with' the Doctor and Liz and the latter is kidnapped by Reegan and taken to work with Lennox.

Back at the Space Centre, Professor Cornish intends to send up another capsule, but Quinlan and Carrington are against this idea. There is insufficient standard rocket fuel - 'K' - to make the trip. A more powerful variant - 'M3' - could be mixed with 'K' but this would create more G-force than a human astronaut could stand. The Doctor therefore offers to pilot the ship himself.

The Doctor realises that the message is a mathematical formula for building a machine. Taltalian has already constructed such a machine and he gives it to Reegan whom he is in leage with. The alien astronauts are to be used to carry out raids on selected targets. Reegan gives the unreliable Taltalian a time bomb with which to kill the Doctor, but Reegan sets the timer to nil and Taltalian is killed as he tries to plant it.

Quinlan asks the Doctor to come and see him, but an alien arrives and kills him. It also incinerates the contents of his safe. When the Doctor arrives, the alien is prevented from killing him by the Brigadier, and the alien leaves.

Lennox escapes from the laboratory and arrives at UNIT HQ wanting to see the Brigadier, so Sergeant Benton (John Levene) has him locked in a cell. Later, somebody places a radioactive isotope in Lennox's cell to kill him. Reegan sabotages the mix of rocket fuel for the Doctor's ship. The Doctor survives the increased G-force of lift off and heads for e a rendezvous with Mars Probe 7.

When he arrives, Recovery 7 is swallowed up by an enormous alien craft, half a mile across. The Doctor learns that the three human astronauts, Van Lyden, Frank Michaels (Neville Simons) and Joe Lefee (Steve Peters), are alive and well, although the ship's alien captain (Peter Noel Cook; voice: Peter Halliday) threatens to attack the Earth unless their three ambassadors are returned.

The Doctor returns to Earth, but Reegan sabotages the decontamination tank and the Doctor is gassed. He is taken to Reegan's laboratory. Reegan wants the Doctor to build a device which will translate the alien's speech - Taltalian's device allows the humans to communicate with the aliens only via a series of electronic pulses. Carrington arrives and is revealed to be Reegan's mysterious boss. He threatens to kill the Doctor but Reegan convinces Carrington that the Doctor is of use to them. While Reegan takes the aliens to steal more radioactive isotopes, Carrington plans a world-wide television broadcast from the Space Centre in which he will reveal the presence of the aliens to the world and appeal to all nations to unite in war against the invaders whom he blames for the death of Jim Daniels on his final Mars mission.

The Doctor constructs a Morse signaller with which to alert UNIT and also builds the translator device. Carrington has the Brigadier arrested, but he escapes and liberates the Doctor and Liz. They all return to the Space Centre with the aliens and Carrington is arrested before he can start his broadcast. The Doctor arranges with the alien captain to swap the alien ambassadors for the human pilots and then leaves the situation for the Brigadier and Liz to manage. 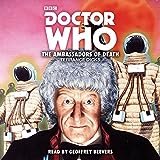 The Ambassadors of Death: Part 1
Not Availa

The Ambassadors of Death (Part 6)
Not Availa 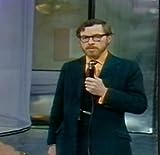 The Ambassadors of Death (Part 7)