The Doctor and Sarah arrive on what appears to be Earth, at what they hope is the correct time, and try to make contact with UNIT. The local English village of Devesham seems deserted until all the villagers arrive in army lorries, driven by silent white-suited and space-helmeted men. The villagers act strangely, standing silently until the clock chimes, when they all instantly start to behave normally.

The Doctor is immediately suspicious and his suspicions are confirmed when he is attacked and chased by the white-suited men, who are in fact androids with guns in their index fingers.

The TARDIS dematerialises of its own accord after Sarah inserts the key in the lock and the Doctor realises that this is not Earth. It is in fact the planet Oseidon, home of the Kraals, who have created an exact replica of Devesham and its nearby Space Defence Station in order to test their android villagers prior to a full invasion of Earth.

The Kraals are being helped by a human astronaut, Guy Crayford, who is resentful at his fellow humans who he believes abandoned him in space. The Kraals have convinced Crayford that they rescued him and re-built him after a crash, and he discovers too late that this is a lie to gain his trust.

Styggron, the Kraal leader, intends to infect the humans on Earth with a virulent virus and to replace prominent figures with his androids causing as much disruption as possible and thus weakening resistance to the planned invasion. The TARDIS travels on to Earth alone, and the Doctor and Sarah are forced to travel in Crayford's rocket, the XK5 space freighter, which is also being used to carry the spearhead of the Kraal invasion. Arriving on Earth, they try to persuade UNIT troops at the Space Defence Station that there is an invasion imminent, but the Brigadier is away in Geneva, and Guy Crayford is being hailed by all as a hero. The Doctor manages to jam the control frequency of the now active android duplicates (including copies of himself, Harry Sullivan and RSM Benton), and prevents Styggron from releasing his virus. Styggron accidentally infects himself during a fight with the android Doctor and is killed.

The Doctor and Sarah leave UNIT to clear up and to deal with the explanations, while they slip back to the TARDIS

Doctor Who: The Android Invasion (Story 83)
Not Availa 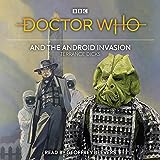 Doctor Who and the Android Invasion: 4th Doctor Novelisation
£20.00