The Hand Of Fear

The Doctor and Sarah return to present-day Earth when the TARDIS arrives in a deserted quarry, silent except for the howl of a warning klaxon. Too late they realise that the quarry has been set with explosives. Sarah is buried under rubble from a massive explosion.

As the miners and the Doctor frantically search for her she regains consciousness to find herself entombed. Seeing a hand reaching for her she grasps it only to find that it is a fossil. Some sort of energy moves from the hand into her mind, knocking her unconscious once more.

Sarah is found and taken to hospital where nothing appears to be wrong with her. She comes round and takes a blue-stoned ring from the fossil hand and places it on her own. Light from the ring stuns Doctor Carter, and Sarah leaves the hospital in a trance, taking the fossil hand with her and heading for the nearby Nunton Complex for Research and Development, where she enters the core of the nuclear reactor.

The stone hand soaks up all the deadly radiation, comes alive and grows into an alien creature from the planet Kastria. Eldrad was a criminal who plotted to destroy Kastria when he was denied power. He disabled the spatial barriers which held back the solar winds, so that life on the surface became impossible. Caught and sentenced to death, he was placed in a Syllenic Obliteration Module - a space capsule - which was sent out into deep space. Before the last surviving Kastrians lost contact, the capsule was blown up. However Eldrad's hand was not totally destroyed and this part of the silicone-based body drifted to Earth where it lay for centuries.

Eldrad, who appears to all intents and purposes female - he patterned his regenerated body on Sarah's - persuades the Doctor to take him back to Kastria where he might reclaim his heritage. There he discovers that his heritage is a dead planet: the Kastrian race is long gone and the race banks of his people were destroyed by the last King, Rokon, and the Kastrian people in a final act of defiance in case Eldrad should ever return. He has his wish - he is King ... of nothing.

Furious, Eldrad, whose body has now been reconfigured into its proper form, tries to get the Doctor to return him to Earth so that he might rule there instead. The Doctor and Sarah run and when Eldrad storms after them, they trip him into a deep crevasse using the Doctor's scarf.

The Doctor and Sarah return to the TARDIS where without warning the Doctor receives a summons to return to Gallifrey. He tells Sarah that she must leave him as humans are not permitted on his home world. Sarah is let off the TARDIS supposedly in her home town of Croydon, but does not recognise the street - the Doctor has done it again! 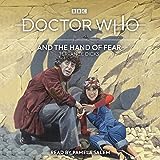 The Hand of Fear (Part 2)
Not Availa