Christmas Eve, 1851, and Cybermen stalk the snow of Victorian London. But when the Doctor meets another Doctor, the two must combine forces to stop the rise of the CyberKing.

Doctor Who - The Specials (3 Dvd) [Italian Edition]
Not Availa 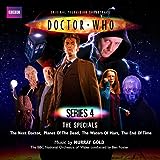