The Power of the Daleks

Polly and Ben witness the Doctor's apparent physical transformation but are left uncertain as to the true identity of the younger man now before them.

The TARDIS arrives on the planet Vulcan. The Doctor takes a stroll through the mercury swamps and witnesses the murder of an Earth Examiner (Martin King), who has been sent to the human colony based on the planet. When the Deputy Governor Quinn (Nicholas Hawtrey) and Head of Security Bragen (Bernard Archard) appear, the Doctor assumes the dead man's identity. Quinn and Bragen escort the Doctor, Ben and Polly to the colony, where Governor Hensell (Peter Bathurst) reveals that a 200-year old crashed spaceship has been discovered in the swamps. It has been examined by the scientist Lesterson (Robert James) and his assistant Janley (Pamela Ann Davy) but they have been unable to gain access. Both Hensell and Lesterson presume that the other has sent for the Earth Examiner and are concerned when they discover that this is not so - especially as there is a degree of unrest amongst the colonists.

The Doctor and his companions sneak into Lesterson's laboratory. The Doctor manages to get inside the crashed spaceship and discovers two apparently dead Daleks and evidence that a third has already been removed. A claw-like creature suddenly scuttles into the shadows. Bragen is summoned by Lesterson and the Doctor tries in vain to warn him about the missing Dalek. The travellers later discover that their rooms are bugged. The Doctor decides that he must transmit his suspicions back to Earth but finds that the transmitter has been sabotaged and the technician (Philip Ryan) attacked. The only other person found in the communications room is Quinn, who is arrested by Bragen and charged with murdering the man in the swamp.

Lesterson has been experimenting on the third Dalek, which he has removed from the ship and hidden with the help of Janley and Resno (Edward Kelsey). Drawing power from cables, the Dalek reactivates, its first act being to blast Resno. Resno is rushed away and Janley later tells Lesterson that he is recovering. Lesterson removes the Dalek's gun and takes the alien with him to an enquiry by Hensell into Quinn's alleged treason. When the Dalek (Gerald Taylor; voice: Peter Hawkins) sees the Doctor it immediately recognises him. Lesterson asserts that the creatures can be used as slaves, but the Doctor argues that they are dangerous and should be destroyed. The Dalek glides forward declaring 'I am your servant' to Hensell.

The Doctor's warnings go unheeded and the enquiry continues to hear evidence against Quinn, who is accused of being a rebel set on undermining confidence in the colony's leaders. Bragen alleges that Quinn wishes to usurp Hensell's position. In reality it is Bragen himself who is bidding to take over, using Janley to stir up the rebels so that he can use their arrest as a springboard to power. Janley lures Polly to the Communications Room where she is kidnapped by a rebel called Valmar (Richard Kane). The Dalek has promised Lesterson that it will improve the colony's meteorite deflector. It then uses this as a ruse to power up the two dormant Daleks, which are still armed. The Doctor and Ben enter the laboratory in time to hear the Daleks' plans to regain full mobility using static electricity and then to take over the colony. Hensell goes on a tour of the perimeter leaving his new deputy, Bragen, in charge. Bragen warns the Doctor that he knows he is an impostor - thus confirming the Doctor's suspicion that he is the true murderer. The Doctor then receives a note from the rebels informing him of Polly's kidnap and warning him not to move against the Daleks. Lesterson has become alarmed by the Daleks' demands for raw materials and power but is blackmailed into silence by Janley, who reveals that Resno is in fact dead. The Doctor has discovered that there are now four Daleksand that Janley and Valmar have begun laying a power cable around the colony to give them greater mobility.

The Doctor and Ben decipher a secret message that leads them to a covert meeting of the rebels. They watch from hiding as Janley and Valmar demonstrate to Bragen an armed Dalek apparently operated by remote control, with which they plan to take over the colony. The Dalek registers the travellers' presence, however, and they are captured. The Doctor is imprisoned with Quinn. Lesterson sneaks into the crashed ship and discovers a production line ready to create hundreds of new Daleks. He attempts to shut down the power but the Daleks now have the ability to create and store their own. The Daleks continue with the deception that they are willing slaves to Janley and Valmar. When Lesterson tries to warn Bragen, Janley convinces Bragen that the scientist is ill through overwork.

The Doctor and Quinn escape and make contact with Hensell, who rushes back to the colony to find Bragen has seized power, surrounded by guards loyal to him. Bragen arms a Dalek and commands it to kill Hensell. Polly has been held captive in the laboratory. The Doctor and Quinn free her by overpowering her guard, Kebble (Steven Scott). They speed to the Governor's office but are too late to save him. Inside the Dalek spaceship a Dalek army (Gerald Taylor, Kevin Manser, Robert Jewell, John Scott Martin, Nick Evans) is now poised to 'conquer and destroy'. Quinn, the Doctor and Polly are escorted to the cells by Bragen's men but a group of Daleks appear and order the guards to leave. The Doctor and friends use the confusion to escape and are reunited with Ben, who has been held prisoner by Valmar. Bragen tells Janley that, having taken over the colony, he now intends to kill the rebels. Horrified, Janley rushes to inform Valmar. On hearing Bragen's plan, the Daleks offer their services to Valmar and the rebels. Once turned loose in the colony, however, they begin to kill indiscriminately.

The Doctor and his companions discover Lesterson, whose sanity has begun to crumble. The group once again return to the laboratory. Lesterson reveals that they will need the help of Valmar, who set up the Daleks' power cabling, if they are to succeed. They find Valmar mourning the death of his partner Janley - a victim of the Daleks. Now aware of the Daleks' true motives, Bragen is convinced by Quinn and the Doctor to allow his guards to create a diversion while the Doctor and Lesterson work on the Dalek ship.

The Daleks return to the laboratory just before the Doctor completes his adjustments to the power generator. Lesterson sacrifices his own life as a diversion to allow the Doctor to make the final connection, which overloads the power system and causes the Daleks' casings to explode. Now free of the Dalek threat, Bragen makes one more attempt to regain power, but Valmar kills him.

Ben, Polly and the Doctor head back to the TARDIS leaving Quinn and Valmar to rebuild the colony. A crushed Dalek stands by the TARDIS, and, as the ship dematerialises, its eyestalk slowly rises 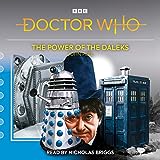