The Seeds of Doom

Following the adventure on Karn, the Doctor and Sarah return to Earth. Some time later news reaches them that a strange, unidentified vegetable pod has been discovered in the Antarctic by John Stevenson's research team at Camp Five. The Doctor's suspicions are aroused and he and Sarah hurry to the scene.

The pod is from the Krynoid, an alien vegetable which feeds on a host planet's animal life until the planet is dead and then sends its spores out into space where they fall to other worlds to germinate. In the course of investigating the pod, the scientists at the Antarctic had fed it, causing it to germinate, taking over the body of Charles Winlett, one of their team. As Winlett slowly mutates into a plant creature, so its lust for blood grows and it escapes, running wild on the base.

News of the pod is leaked by an unscrupulous politician working for the World Ecology Bureau and reaches botanist and plant collector Harrison Chase, who decides that he has to add this unique specimen to his collection. He despatches his henchman Scorby and botanist Arnold Keeler to bring the pod back. They take possession of a second pod which had been discovered and set explosives to destroy the base before returning to England, leaving Sarah tied up right beside the bomb. The Doctor manages to rescue Sarah and traps the Krynoid with the bomb just before it detonates.

The Doctor and Sarah return to London on the trail of the second pod and trace it to Chase's mansion. They gain access to the grounds with the help of Amelia Ducat, an ageing painter of flora, but are caught by the patrolling guards. Chase realises that he has to investigate what Keeler and Scorby have told him about the infected human at the Antarctic base, and arranges for the pod to be germinated under controlled conditions while a human host is forcibly held nearby. Unfortunately the host turns out to be Sarah.

The Doctor rescues his companion in the nick of time, but Keeler is less lucky and is infected by the plant. His transformation into a Krynoid is accelerated by Chase who arranges for him to be fed. Growing in strength, the Keeler-creature escapes from captivity and goes on the rampage through Chase's estate, growing stronger and larger by the hour.

Eventually the Krynoid grows to giant proportions, dwarfing Chase's house. Chase, who is by now totally insane, decides to turn the Doctor into compost for his garden by feeding him into a pulverising machine. The Doctor escapes this grisly fate, but Chase is not so lucky and falls into the grinder following a struggle.

Meanwhile UNIT, led by Major Beresford, have been called in and they arrange to bomb the Krynoid before it can pollenate and spread its pods across the Earth.

After all the excitement, the Doctor and Sarah decide that they need a holiday on Cassiopeia, but much to Sarah's dismay the ever-unpredictable TARDIS takes them back to the Antarctic.

Doctor Who: The Seeds of Doom (Story 85)
Not Availa

The Seeds of Doom: Part 1
Not Availa 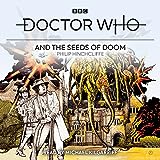