A weather balloon carrying a device for cosmic ray research comes down in the Minsbridge Wild Life Sanctuary and is found by the local gamekeeper, Mr Ollis (Laurie Webb). Its' owner, Doctor Tyler (Rex Robinson), is summoned by Ollis' wife (Patricia Prior) but Ollis vanishes from beside the device before he arrives. Tyler contacts UNIT and takes the device into their HQ. He was going to contact them anyway in view of the recent results of his tests which show an unknown type of cosmic lightning, directed at the Earth. The Doctor is intrigued and goes to see the spot where the balloon came down.

While the Doctor is gone, Tyler develops the latest negative from his device. It shows an image of Ollis. Tyler also suddenly vanishes and a crackling organism emerges from the box and goes down the sink plug hole. When the Doctor and Jo arrive back at UNIT HQ they are confronted by the organism when it emerges from a drain and Bessie vanishes. The Doctor postulates that the creature is hunting him and that they need only wait before it tries again.

Suddenly, the building is besieged by orange globby creatures (Peter Murphy Grumbar, Ricky Newby, John Scott Martin, Cy Town). Corporal Palmer (Denys Palmer) calls for Benton (John Levene) and a full scale battle is soon in progress. The Brigadier (Nicholas Courtney) evacuates the building and leaves the Doctor and Jo with Benton. The organism emerges from an air vent and the Doctor ushers Jo and Benton into the TARDIS to escape. The Doctor cannot get the TARDIS to operate and so sends an SOS to the Time Lords.

The Time Lords have problems of their own. All their energy is being drained away through a black hole and they are sending the Doctor all the power they can. The Chancellor (Clyde Pollitt) tells the President of the Council (Roy Purcell) that they are up against a force in a universe of anti-matter. He elects, against the President's better judgment, to send the Doctor's previous incarnations to help. He gets another Time Lord (Graham Leaman) to arrange the transfer.

The Doctor finds a recorder on the TARDIS console and it is claimed by his previous self (Patrick Troughton) who appears from nowhere. The two Doctors link minds so that each knows what has happened so far. To stop them arguing the Time Lords send the earliest incarnation of the Doctor (William Hartnell). He appears on the TARDIS' scanner screen and points out that the entity outside is a bridge.

The third Doctor makes his decision and, switching off the force field, leaves the ship, closely followed by Jo. They vanish and the entity calms down. The Brigadier returns and is astonished to see the second Doctor. He doesn't understand what has happened but wants the Doctor to find a way of controlling the organism.

The third Doctor and Jo find themselves on a bleak, rocky planet. They are watched by an unseen Omega (Stephen Thorne) who orders them brought to him. The Doctor meets up with Tyler and all three are captured by the orange globby Gell Guards and taken into Omega's palace.

Meanwhile the second Doctor has rigged up a device to pacify the entity, but when Benton uses it, it enrages it instead. The Doctor pushes Benton and the Brigadier into the TARDIS to escape. The Doctor realises that his recorder is missing, but cannot find it. The first Doctor appears on the screen once more and advocates turning off the force field. The second Doctor complies and the whole of UNIT HQ is transported through the black hole.

While Jo and Tyler are placed in a cell, the third Doctor talks with Omega, a hero from Time Lord mythology. He was a solar engineer who arranged the detonation of a star in order to find and create a power source to give the Time Lords mastery over time itself. Omega claims he was sacrificed to the resultant super nova and now wants revenge over the Time Lords. He created the anti-matter world by the force of his will. Omega receives a message that others have arrived and he has them brought to him. The Brigadier, who left UNIT HQ thinking it had been transported to Cromer, eludes capture and finds Mr Ollis.

When Omega realises that the two Doctors are one and the same Time Lord, he is enraged and has them put in the cell with the others. Jo suggests that the Doctors match their wills against Omega and create a door in the cell. This works and they escape. The Doctors head for the singularity chamber while the others escape from the palace and meet up with the Brigadier and Ollis who all return to UNIT HQ.

Omega finds the Doctors in the singularity chamber and is infuriated. He subjects the third Doctor to a mental battle of wills with the dark side of his mind (Alan Chuntz). Releasing the Doctor, Omega explains that he is trapped in this universe, unable to leave. In order to escape he must abandon control and if he abandons control then he cannot escape. He wants the Doctor to take his place. The Doctors agree but they discover that all that remains of Omega is his will - he can never leave. In Omega's pain and rage at this realisation, the Doctors escape from the palace and head for UNIT HQ. There, they bundle everyone into the TARDIS until they can decide what to do.

The first Doctor appears on the screen and they realise that they can use the TARDIS' force field generator to destroy Omega. When they go to disconnect it, the find that the second Doctor's recorder is inside the generator. Omega allows the Doctor to move the TARDIS to his palace where they persuade him to let all the others return to Earth. When this has happened, they offer him the generator and recorder. Omega sweeps it from their hands in disgust and there is a massive outpouring of power, turning the black hole into a super nova, returning the Doctors and the TARDIS to UNIT HQ on Earth and restoring power to the Time Lords.

The Doctor explains that the recorder had not been converted to anti-matter, and so when Omega knocked it from the generator, the collision of matter and anti-matter destroyed his universe, snapping everything else back to its rightful place.

Everyone says their goodbyes: the first and second Doctors, Tyler, Benton and the Brigadier. Ollis has been returned to the Wild Life Sanctuary. The Doctor is upset at having had to trick Omega. Suddenly a new dematerialisation circuit appears on the top of the TARDIS' central column, and the Doctor's time travel knowledge and codes come back to him. The Time Lords have forgiven him and have restored his freedom.

Doctor Who: The Three Doctors [Region 2]
Not Availa 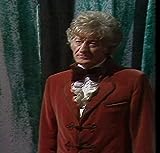 The Three Doctors (Part 4)
Not Availa