When Sarah Jane Smith arrives to visit her Aunt Lavinia she finds that her learned relative has left early for a lecture tour in America leaving her a large crate that has been waiting for Sarah for a number of years. When they open it, they discover a mechanical dog named K-9. A gift from the Doctor. 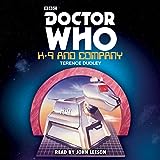 The Companions of Doctor Who: K9 and Company
£2.90