he Doctor and Lucie go glam when the TARDIS makes an unexpected landing in 1974. Slade, The Sweet and Suzi Quatro are Top of the Pops - and brother-and-sister duo The Tomorrow Twins will soon be joining them, if the starmaking Svengali Arnold Korns has his way. But will their dreams turn to dust at a service station somewhere on the M62, besieged by a pack of alien monsters? 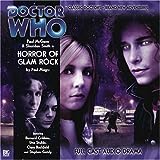 Doctor Who and the Daleks (Illustrated Edition)
£9.99