1934: the TARDIS lands on a snowy island off the coast of Alaska – one that wasn’t there four years, three months and six days ago, according to the Doctor. The island is dominated by a vast, twisted citadel. Inside it, the Lurkers lie dreaming.  It's said when they wake the world will end… 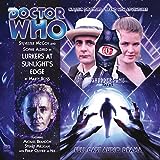