The Emperor of Eternity


After colliding with a meteor in space, the TARDIS is forced to make an emergency landing on Earth. The place is China around 200 BC, during the reign of the first emperor, Qin. 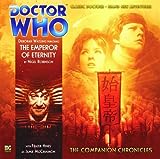 Dr Who Emperor of Eternity (Dr Who Companion Chronicles)
£15.00