The Doctor and Romana are enjoying a holiday in Paris 1979 when time starts to fracture around them. The Doctor is determined to continue the holiday, but time slips again when they visit the Louvre to see the Mona Lisa. The Doctor, dazed by the phenomenon, is helped by a Countess when he falls semi-conscious into her lap. The Doctor takes this opportunity to slip a futuristic alien bracelet from her wrist.

Later, at a roadside cafe, the Doctor and Romana meet a private detective, Duggan, who explains that he has been investigating the Countess's husband, Count Scarlioni. All three are then 'invited' at gunpoint to visit the Count by a group of thugs. Scarlioni locks them in his cellar and the Doctor discovers that he has eight Mona Lisas stored there too, all of them originals!

The Count is actually an alien called Scaroth, the last member of the Jaggaroth race. He was splintered in time when his ship exploded above primeval Earth and in his twelve aspects has been guiding the development of mankind to a point where time travel is possible. He now intends to travel back in time and prevent himself from destroying the ship.

The Doctor travels back to 1505 in the TARDIS to visit the Florentine home of Leonardo Da Vinci and writes 'This is a Fake' in black marker pen on eight canvasses, leaving the artist a note just to paint over them. While he is there he discovers that it was a splinter of Scaroth who arranged for Leonardo do produce eight copies of the painting in the first place. He then follows Scarlioni back 400 million years to primeval Earth and with Duggan's help prevents him from altering the course of time.

Scaroth's ship explodes as before and the resultant blast of radiation brings life into being in the primordial swamps below, life which will eventually develop into mankind. 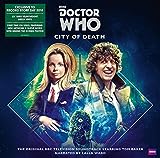