Destiny of the Daleks

As chance would have it, the first place the randomiser chooses to deposit the TARDIS is somewhere the Doctor knows only too well - Skaro. After Romana has regenerated into the form of Princess Astra, she and the Doctor leave the TARDIS to investigate.

After watching a bedraggled group of slaves bury one of their dead, a Kantrian, the Doctor and Romana see a space craft land and bury itself in the sand of the planet's surface. A series of mining explosions then rock the planet and the time travellers take cover in some ruined buildings. The Doctor becomes trapped under some fallen masonry and Romana returns to the TARDIS to fetch K-9.

While she is gone, the Doctor is rescued by the Movellans, a race of robots, and taken back to their newly arrived ship.

When Romana returns (a rock fall had partially buried the TARDIS and she could not get in), she finds the Doctor missing. One of the slave workers, Tyssan, who has been following her, approaches and she backs away in alarm, falling down a duct into a lower level of the ruined city. She is soon surrounded by Daleks who take her away for questioning. Following this she is assigned to work with Labour Force Two, a group of slave workers, clearing rocks away from the drilling areas.

Tyssan is found by the Movellans and explains what has happened. The Doctor, together with a group of Movellans, returns to the city to investigate. They meet up with Romana who had feigned death to escape from the mining team, and deep in the city find what the Daleks are searching for - Davros.

Davros is reactivated and takes command of the Daleks as the Doctor, Romana and Tyssan escape. The Movellans, now aware that the Daleks need Davros to break the logical stalemate that the Movellans' and the Daleks' battle computers are in, decide to recapture the Doctor to help them do likewise. They stun Romana and place her inside a tube containing a powerful explosive, the Nova device. This will be the bait to lure the Doctor. The trap works and the Movellans take the Doctor and Romana back to their ship, intending to destroy the planet with the bomb once they are safely clear.

Meanwhile Davros has been briefed on the problem by a computer sphere, and decides to destroy the Movellans using a squad of Daleks on a suicide mission. Each Dalek is loaded with bombs which will be detonated by Davros once they are in position around the Movellan spaceship.

The danger over, Davros is cryogenically frozen on board the Movellan ship until he can be tried on Earth for his crimes, and Tyssan takes the ship to return the slaves to their rightful homes.

The Creature from the Pit: Part 2
Not Availa 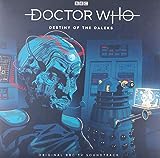 Destiny of the Daleks: Part 1
Not Availa

Destiny of the Daleks (Part 1)
Not Availa