Day of the Daleks

Sir Reginald Styles (Wilfrid Carter), organiser of a world peace conference, narrowly survives an assassination attempt by a combat-uniformed guerrilla who vanishes like a ghost. Later the guerrilla is attacked by huge, ape-like creatures called Ogrons and found unconscious by UNIT troops in the grounds of the house. The Doctor deduces that he comes from about two hundred years in the future and that a device found with him is a time machine. While Styles is away, the Doctor and Jo keep watch. The guerrillas attack again, but the Time Lord convinces them that he is not Styles. One of their party, Shura (Jimmy Winston), is later injured by an Ogron. Jo meanwhile accidentally activates one of the guerrillas' time machines and is transported to the 22nd Century. When the guerillas return there, the Doctor goes with them. He learns that the Earth of this period is ruled by the Daleks with the help of the Ogrons and human collaborators, whose leader is known as the Controller (Aubrey Woods).

Jo and the Doctor are both taken prisoner at the Dalek base. The guerrillas rescue them and explain that they are attempting to kill Styles because he caused an explosion at the peace conference, starting a series of wars that left humanity vulnerable to Dalek conquest - a history that they wish to change. The Doctor realises that the explosion was actually caused by Shura in a misguided attempt to fulfil his mission. Returning to the 20th Century with Jo, he has Styles' house evacuated. Daleks and Ogrons arrive in pursuit, but are destroyed when Shura detonates his bomb. 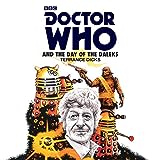 Day of the Daleks
Not Availa