Strange things are happening at the village of Devil's End. A man, Jim (John Holmes), is killed in the graveyard and whereas Doctor Reeves (Eric Hillyard) insists he died of a heart attack, the local white witch, Olive Hawthorne (Damaris Hayman), thinks he died of fright. Miss Hawthorne is concerned because that night, 30 April, or Beltane, an outside broadcast crew from BBC3 is covering Professor Horner's (Robin Wentworth) opening of an ancient barrow called the Devil's Hump just outside Devil's End. Horner plans to break through at midnight and explains to reporter Alistair Fergus (David Simeon) that he believes the barrow to contain the tomb of a warrior chieftain.

Watching on television at UNIT HQ, the Doctor becomes very concerned and leaves for Devil's End with Jo to try and stop Horner.

Miss Hawthorne goes to see the new vicar - Canon Smallwood having left suddenly under mysterious circumstances. She speaks to the verger, Garvin (John Joyce), before Mr Magister arrives. Magister is the Master (Roger Delgado). He tries but fails to hypnotise Miss Hawthorne, who goes to find help elsewhere.

The Doctor and Jo arrive at the village and get directions to the dig from Squire Winstanley (Rollo Gamble) in the local pub, The Cloven Hoof. Tom Girton (Jon Croft) lets the Master know that they have arrived as the Master prepares for an occult ceremony in a cavern below the church. The ceremony starts as the television broadcast begins.

As Horner breaks into the barrow, an icy wind starts to blow. The Doctor and Jo arrive and the Doctor rushes to the barrow. When Jo gets there, both the Doctor and Horner have been frozen solid. The Doctor is taken to the pub where Doctor Reeves detects a faint pulse. Jo contacts Mike Yates (Richard Franklin) and Benton (John Levene) at UNIT HQ and PC Groom (Christopher Wray) cordons off the barrow as two red eyes peer from within the Hump.

The next morning, the Master performs a ritual on his own and summons a creature called Azal (Stephen Thorne). Groom is killed by something that emerges from the Hump. Arriving by helicopter, Yates and Benton see giant hoofprints crossing the countryside. In the village, Benton hears Miss Hawthorne calling from the church and rescues her from a trunk in which she had been placed after being tied up by Garvin. Garvin finds them in the cavern; Benton falls onto a marked flagstone and is attacked by unseen forces. Outside the church, they see something huge coming for them. Garvin fires his shotgun at it and is vaporised. The something goes into the cavern and into the marked flagstone.

At the pub, Miss Hawthorne explains what she saw to the Doctor. When she mentions Mr Magister, the Doctor realises that the Master is involved. The Doctor goes up to the dig with Jo and inside the barrow they find a miniaturised spacecraft and are attacked by a living gargoyle, Bok (Stanley Mason). The Doctor fends off the latter with an iron trowel and a line from a Venusian lullaby.

Back at the pub, the Doctor explains that the Master has summoned a D�mon, one of an ancient race who have visited Earth several times. The D�mons are the origin of the myth of the horned beast but 100,000 years ago came from the planet Damos which is 60,000 light years away. The Master is using their advanced science to summon the creature, which will appear three times.

The Brigadier has determined that the village is completely enclosed in a dome of heat approximately ten miles in diameter and one mile high. The Doctor tries to explain to the Brigadier over Yates' walkie talkie that they need to build a diathermic energy exchanger but Sergeant Osgood (Alec Linstead), the Brigadier's technical expert, does not understand. The Doctor decides to go out to the barrier to try and explain face to face. He takes Jo with him in Bessie.

The Master, alerted to UNIT's plans by Bert (Don McKillop) the landlord, sends Girton to deal with them. The Master has convened a meeting of the villagers at which the Squire is vaporised by Bok for not agreeing with the Master. The rest of the villagers are suitably cowed.

Girton steals the UNIT helicopter and chases the Doctor and Jo. The Doctor drives Bessie straight for the heat barrier. He swerves asise just at the last moment but the helicopter does not and blows up. Jo is thrown from Bessie and knocked out. Mike Yates, following on a motor cycle, takes her back to the pub in Bessie while the Doctor tries to explain to Osgood what is needed to break through the heat barrier.

The Master summons Azal a second time and there is another earthquake. The Master wants Azal's power but the D�mon wants to speak with the Doctor. He is the last of his race and will consider passing his power to the Master but he may also destroy the planet. Jo comes round in the pub and climbs out of a window as she wants to get to the cavern. She is captured by some thrashing vines on her way there and is knocked unconscious once more. Mike realises she has gone and goes to the cavern to look for her himself.

The Master sends Bert to deal with the Doctor and the landlord shoots at the Time Lord as he returns on the motor bike. The Doctor continues on foot. Bert tells the Master and the Master arranges a reception for the Doctor in the village.

When the Doctor arrives he is jostled by some Morris Dancers (The Headington Quarry Men) and tied to a maypole. Bert, in a costume of torn newspaper, threatens him with a gun and the maypole dancers further secure him with their ribbons. Watching from the pub, Miss Hawthorne goes to stop them. She claims the Doctor is the wizard Quiquaequod and he proves his power by shattering a nearby lamp and making the weather-cock on the church tower spin - courtesy of Benton's sharp-shooting from the pub. As a final demonstration, the Doctor operates Bessie by remote control. The villagers are convinced - although Bert is not - and the Doctor is released.

The Master, watched by Jo and Mike in hiding, starts the final ceremony. Jo cries out when he is about to sacrifice a chicken but Azal appears. Jo is dressed in a sacrificial garment and Yates escapes to warn the Doctor. Bert runs up to the church and is vaporised by Bok who is standing guard. The Doctor needs the Brigadier to bring the machine through the barrier immediately. Osgood switches on and a tunnel forms through the heat barrier. The machine starts draining Azal's power. The Brigadier brings the machine through the barrier but it explodes.

The Doctor manages to slip past Bok and into the cavern. Azal releases Jo and the Doctor tells Azal to leave but the D�mon won't listen. He is not convinced that the Master should have his power and decides to pass it on to the Doctor instead, but the Time Lord doesn't want it. Azal therefore agrees to give it to the Master. Azal starts to kill the Doctor, but Jo pushes in front of him and tells Azal to kill her instead. Azal does not understand this action and his power turns against him in his confusion. Everyone flees the church just before it explodes.

Benton arrests the Master and normality returns to the village. 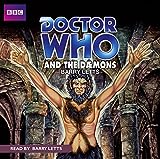