Delta and the Bannermen

On an unnamed planet, Delta (Belinda Mayne), a Chimeron queen, takes cover in one of the ships of the attacking Bannermen in order to escape from them. Gavrok (Don Henderson), leader of the Bannermen (Philip Babot, Terry Bennett, Darrell Brook, Russell Diamond, Ricky Garrett, Derek Hartley, Ian Lawrence, Jared Morgan, Bill Malin, Robert Patton, Rob York), ambushes her there, but is shot by another Chimeron (Tim Scott), and falls outside. The wounded Chimeron gives Delta a box and tells her to keep it with her. He then dies, leaving her as the last survivor of her race.

The TARDIS arrives at Tollport G715 where the Doctor and Mel meet the Toll Keeper (Ken Dodd) who informs them that they are the ten billionth customers and have therefore won a trip to Disneyland, Earth in 1959. They are to travel with Nostalgia Trips, a specialist company run by the Navarinos, in a spaceship that looks like an old bus. Mel agrees to board the bus with the other holidaymakers, but the Doctor opts to follow in the TARDIS. Just before they leave, Delta arrives in the stolen Bannerman ship, and also boards the bus.

In space, the bus crashes into a satellite recently launched from Cape Canaveral and plunges to Earth. The Doctor, by using the TARDISs vortex drive to create an anti gravity spiral, manages to ensure it a safe landing. Instead of Disneyland, however, it arrives at Shangri-La, a Welsh holiday camp in 1959. The holidaymakers are greeted by Burton (Richard Davies), camp manager, who agrees that they can use their facilities until the bus is mended. He introduces Billy (David Kinder), a mechanic who will help to fix the bus, and Ray (Sara Griffiths), a girl who fancies Billy and who lends him some tools. The buss power crystal is damaged and a spare, supplied by the Doctor, is accidentally broken by the driver, Murray (Johnny Dennis). Murray is disappointed to learn that it will take twenty-four hours for the Doctor to grow a further replacement.

Gavrok arrives at the Tollport in pursuit of Delta and threatens and then kills the Toll Keeper before heading to Earth in search of the bus.

At a get to know you dance, Billy, who is also a singer, dedicates a song to Delta, whom he has taken a shine to. Ray leaves in tears. The Doctor follows and comforts Ray in a laundry room, but they are interrupted by one of the other alien holidaymakers, Keillor (Brian Hibbard), who uses a transmitter device to contact Gavrok and tell him of the Chimeron Queens location. Gavrok is pleased, but kills Keillor by blowing up his transmitter. The explosion also knocks out the Doctor and Ray.

Deltas box has meanwhile been revealed to contain a large egg. Before Mels horrified eyes, this hatches to reveal a green baby. Billy arrives with flowers for Delta and she explains everything to him and Mel. Then she suggests to Billy that they go for a walk to allow Mel to sleep. Billy takes her and the rapidly growing baby (Jessica McGough) off in the sidecar of his Vincent motorbike.

The Doctor recovers and tries to convince Burton that they are in danger from a Bannerman attack. Burton is sceptical, so the Doctor shows him around the TARDIS in order to convince him that he is speaking the truth. Mel rouses Murray who helps wake everyone and get them on board the bus. The power crystal needs another half hour to finish growing. The Doctor and Ray meanwhile head off to find Billy and Delta.

Gavrok and his men arrive near the holiday camp, having homed in on a transmitter owned by Weismuller (Stubby Kaye) and Hawk (Morgan Deare), two American agents in England to monitor the satellite. He reaches the camp before the bus can leave and destroys it and everyone on board. The Doctor and Ray return with Billy, Delta and the Chimeron child (Amy Osborn) but manage to escape again. Gavrok takes Mel and Burton hostage to use as bait to obtain Delta.

Delta and her child (Laura Collins) are summoned by bees owned by Goronwy (Hugh Lloyd), an old Welsh bee-keeper. They stay with him in his cottage while the Doctor goes to rescue Mel and Burton. The Time Lord blusters his way past Gavrok and leaves with his two friends unscathed. At the cottage, Billy takes a pack of the Chimeron childs special food.

Gavrok finds the TARDIS and places on top of it a sonic cone that will destroy anything that comes close.

The Doctor sets a trap for Gavrok and the Bannermen at Goronwys cottage before leaving the place empty. Gavrok is alerted to Deltas presence at the cottage, and he and his men make a raid. They find themselves covered with honey and attacked by bees.

The Doctor enlists Billys help to set up a powerful amplifier device that he hopes to use to defend Shangri-La against the Bannermen, who are susceptible to shrill noises. Delta discovers that Billy has been eating the Chimeron food so that he will change into a Chimeron and be able to leave with her.

Gavrok and his men return to the camp in their ship. The Doctors device is not finished and is destroyed by the Bannermen, but as an alternative measure the screams of the Chimeron youth (Carley Joseph) are transmitted via the camps public address system. The Bannermen collapse in pain and Gavrok, similarly affected by the sound, accidentally falls into the sonic cones field and is vaporised.

Delta, Billy and the Chimeron child leave in the Bannermens spaceship with the tied-up Bannermen also on board. The Doctor is now able to enter the TARDIS as Gavroks death drained the power from the sonic cone. With Burton distracted by the arrival of the Skegness Glee Club, he and Mel slip away. Hawk and Weismuller are astonished by the TARDISs dematerialisation, but Goronwy glances up at the sky and gives a knowing smile and a wink. 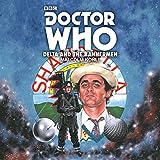 Delta and the Bannermen (Part 1)
Not Availa