The Doctor, having decided to investigate a tracking signal picked up in the TARDIS, brings Mel to Ice World, a space trading colony on the dark side of the planet Svartos. In the restaurant there they meet Sabalom Glitz (Tony Selby), who has come to search for treasure with the aid of a map. A waitress nicknamed Ace (Sophie Aldred) tells them about a mythical dragon that is supposed to live in the lower levels. The Doctor and Glitz decide to go and hunt both the treasure and the dragon.

In charge of Ice World is Kane (Edward Peel), an alien exiled from his home planet of Proamon three thousand years earlier. He has bought Glitzs crew from him and has cryogenically frozen them, this process wiping their minds and turning them into an obedient fighting force. He has arranged for Glitz to obtain the map, which has a tracking device hidden in the seal, as he wants the dragon found for his own reasons.

The Doctor and Glitz set off. Mel is left behind as Glitz objects to her accompanying them. Ace insults a customer (Shirin Taylor) and is fired. She then takes Mel to her room, where she explains that she came to Ice World from Earth in a freak time storm. The two girls hear an announcement over a loudspeaker system that there is an ice block at the docking bay. Ace decides to go and help clear it. She blows up the docking bay door with a can of her home-made nitro-9 explosive. She and Mel are then arrested by Belazs (Patricia Quinn) and taken to Kane.

Kane tries in vain to seduce Ace into joining his mercenary force. The two girls escape into the tunnels of Ice World and encounter the dragon (Leslie Meadows), which fires laser bolts at them.

The Doctor and Glitz have meanwhile become separated. The Doctor climbs over a railing and hangs from his umbrella over an apparently sheer drop. Glitz finds him hanging there and helps him down. He then offers a deal: if the Doctor will help him recover his ship, the Nosferatu, he can have the treasure map. The Doctor agrees.

In the tunnels, the Doctor and Glitz find the dragon, which gestures for them to follow it. Along the way they meet up with Ace and Mel, and also Pudovkin (Nigel Miles-Thomas), one of Glitz crew, who is killed by the dragon.

Belazs plots with Kracauer (Tony Osoba) to kill Kane by raising the temperature. This fails and Kane kills both of them instead.

The dragon shows the Doctor, Glitz, Ace and Mel a poly-dimensional scanning imager. The image of an archivist (Daphne Oxenford) appears and tells of Kane being exiled from Proamon and banished to Svartos. The Doctor realises that the dragon, a biomechanoid, is itself the treasure. The dragons head opens to reveal a crystal crackling with power. Listening via the tracking device in the seal of the map, Kane is pleased. After three thousand years, the dragonfire will be his. Kane orders his troops to eliminate the dragon and bring its head to him. He also revives all the mercenaries and orders them to spread terror throughout Ice World, herding everyone onto the Nosferatu. He wants Ice World cleared.

McLuhan (Stephanie Fayerman) and Bazin (Stuart Organ) hunt the dragon while Glitz heads back to the Nosferatu to obtain some explosives. He arrives just in time to see his ship taking off and then exploding in space, detonated by Kane.

The dragon is killed, but when McLuhan and Bazin try and remove the crystal, they are electrocuted by the power within it. Ace returns to her room to get some more nitro-9 and is captured by Kane. The Doctor and Mel find the dead dragon and are able to remove the crystal as its power has now been diminished. They meet up with Glitz at Aces room and then head on to Kanes HQ.

Kane wants to swap Ace for the dragonfire crystal, which he needs to power his equipment and enable him to return to Proamon to take his revenge on those who exiled him. Mel places the crystal in the circuit and the equipment powers up. Ice World itself is a spacecraft, and it takes off from the surface of Svartos.

The Doctor reveals to Kane that Proamon no longer exists; it was destroyed two thousand years ago when its sun turned supernova. Kane opens a shield, allowing unfiltered sunlight to flood through, and melts away in the glare.

Glitz takes control of Ice World and renames it the Nosferatu II. Mel decides to travel on with Glitz, and the Doctor asks Ace if she would like to go with him in the TARDIS, taking the scenic route back to her home in Perivale. 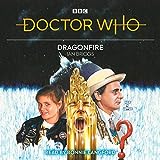 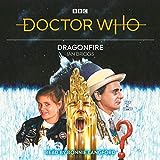