Remembrance of the Daleks

The Doctor and Ace arrive on Earth in 1963, in an alleyway just outside Coal Hill School. The Doctor investigates a van parked in the street while Ace goes to get some food from a nearby café, where she meets a young territorial army sergeant Mike Smith (Dursley McLinden). Moving away from the van, the Doctor wanders into the school playground, where four scorch marks can be seen on the ground. He is watched by a little girl (Jasmine Breaks) who appears to know who he is.

The Doctor returns to the van and bursts in through the back doors. Inside he meets Professor Rachel Jensen (Pamela Salem), a scientific advisor to the army, who tells him that she has been monitoring some unusual transmissions. She then receives a message to return to the secondary source and shouts to Mike Smith, who is returning from the café with Ace. They both jump into the van and drive off, heading for a junkyard in Totters Lane.

On arriving at the junkyard, the Doctor meets Group Captain Gilmore (Simon Williams), who reveals that he has a hostile penned in one of the sheds there. More soldiers arrive as reinforcements, but the hostile is a Dalek which attacks them. The Doctor uses some of Aces nitro-9 to destroy the creature.

Ace and the Doctor head back to the school in the van. On the way, the Doctor explains that the Daleks are after the Hand of Omega, a relic from Gallifrey that he brought to Earth in a previous incarnation. At the school, the headmaster (Michael Sheard) initially refuses the Doctor and Ace permission to look around, but then changes his mind as if receiving orders from elsewhere.

Mike brings in a man named Ratcliffe (George Sewell) to help clear up the debris after the army operation. Ratcliffe however has his own agenda and arranges for the damaged Dalek casing to be removed to a builders yard. There, someone sitting in a Dalek base before a complex piece of equipment demands in Dalek-like tones (John Leeson) that he report.

The Doctor and Ace find a transmat system in the school cellar. A Dalek starts to appear, but the Doctor fiddles with the equipment and it vanishes again. The two travellers are suddenly attacked by another Dalek. Ace manages to get out of the cellar, but the waiting headmaster knocks her to the ground and locks the Doctor in with the Dalek, which is ascending the stairs towards him. Ace recovers and head-butts the headmaster, freeing the Doctor before the Dalek can reach him. They escape from the school. The Dalek blows the door away and orders the headmaster to repair the transmat.

Outside, an army truck has delivered some anti-tank missiles. The Doctor and Ace take one and return to the school. The Doctor intends to destroy the transmat but Ace uses the weapon on the Dalek, and destroys it. The Doctor is perturbed; he fears a Dalek attack and wants the area evacuated. He hurries off, leaving Ace to stay with Mike in a boarding house owned by Mikes mother (Kathleen Bidmead).

That night, while the Doctor sits in the café pondering on the ripples in time created by momentous decisions, more Daleks arrive at the school via the transmat.

The next morning, the Doctor arrives at an undertakers parlour to collect a mysterious box that he left there on a previous visit to Earth. He is left alone with the box while the undertakers assistant (William Thomas) contacts his boss. The Doctor orders the box to open and processes Aces baseball bat. He then orders it to close again and leaves, the box floating along behind him. The Doctor takes the box to a cemetery where a blind priest (Peter Halliday) leads him to an open grave, into which the box sinks.

Ratcliffe, having been told by the Dalek-creature in his yard that obtaining the Hand will give them great power, receives a message from his agent that the device has been located.

Outside the cemetery, the headmaster accosts and struggles with Mike. He demands to know the location of the renegade Dalek base, but Mike claims not to know what he is talking about. The headmaster suddenly collapses.

Mike and the Doctor return to the boarding house, where they learn that Gilmore wants them back at the army headquarters. Ace however is excluded; an arrangement to which she unhappily agrees. She mopes about and switches on the television, then leaves as the start of a new science fiction show is announced at 5.15.

At the army headquarters, the Doctor requests that space tracking stations be alerted to look for spaceships, and warns that the enemy should not be engaged. A mothership is detected in geostationary orbit and the Doctor realises that there are two opposing Dalek factions at work. He creates a device to interfere with the Daleks control systems. Then, when Ace is reported missing, he hurries off to the school, Rachels assistant Alison (Karen Gledhill), having reported the reception of multiple signals from that source.

Ace arrives at the school to retrieve her ghettoblaster, which got left behind there earlier. She switches it on and picks up Dalek transmissions revealing that they are planning to attack. She hurries away, using the mysteriously enhanced baseball bat to destroy any Daleks in her way, but becomes trapped by three of the creatures near the school entrance. The Doctor arrives in the nick of time and disables the Daleks with his device while soldiers place plastic explosive on them. The Daleks are destroyed.

Returning to the school cellar, the Doctor smashes the transmat with the baseball bat. He explains to Ace that he is simply trying to keep the army out of the way as the Dalek forces battle for ownership of the Hand. The Hand, he explains, is really a remote stellar manipulator device. The Daleks want it in order to gain full mastery of time travel. The Doctor intends to let the Daleks have the Hand, but wants to avoid Gilmore and his men from being killed in the process. He must also try to ensure that the Hand goes to the right faction of Daleks.

At the cemetery, Ratcliffe finds the grave containing the Hand. He pushes a metal probe into the soft earth and it suddenly crackles with energy. The energy is detected by the Dalek mothership in space, and the Dalek Emperor orders that an assault shuttle be prepared. Ratcliffe meanwhile arranges for the Hand to be dug up and transported to his yard. A Black Dalek is waiting there and takes possession of the Hand before ordering the extermination of Ratcliffes men. In Ratcliffes office, the Dalek-creature is revealed to be the young girl, who is being used as a human element in the Daleks battle computer. The Black Dalek orders that the time controller to be activated.

The Doctor and Ace make their way to Ratcliffes yard. When the opportunity arises, the Doctor deactivates the Daleks time controller. He also checks with the Hand that it knows what to do. He and Ace then leave, avoiding patrolling Daleks along the way.

The renegade Daleks (operators: Norman Bacon, David Harrison, John Scott-Martin, Hugh Spight, Tony Starr, Cy Town, Nigel Wild; voices: Brian Miller, Royce Mills, Roy Skelton) and soldiers battle outside the school as the imperial Dalek shuttle heads for Earth. The renegade Daleks withdraw on the orders of the battle computer and the shuttle lands in the school playground. Imperial Daleks emerge, intent on capturing the Hand. Mike is revealed to be a traitor working with Ratcliffe and is put under arrest by Gilmore.

The Imperial Daleks storm Ratcliffes yard and take control of the Hand. Ratcliffe is killed by a bolt of electricity fired by the young girl from her hands, but Mike, who has escaped from custody, absconds with the time controller. The imperial Daleks take the Hand back to their mothership in the shuttle.

The Doctor uses the broken transmat system in the school cellar to build a transmitter with which to communicate with the Dalek mothership. After sending Ace after Mike, he contacts the mothership. The Dalek Emperor is revealed to be Davros (Terry Molloy), and the Doctor goads him into using the Hand against Earth. When activated, however, the Hand destroys Skaros sun (which also destroys Skaro) and then returns to the mothership. Davros leaves in an escape pod as the mothership is destroyed.

Ace finds Mike back at the boarding house. They are interrupted by the young girl, who kills Mike with a bolt of energy and then advances on Ace.

The Doctor and Gilmore find the Black Dalek outside Ratcliffes yard. The Doctor convinces it that has been defeated and is the last of its kind still alive, and it self destructs.

At that moment, the young girl collapses. Ace comforts her.

Later, the Doctor and Ace follow Mikes coffin into a church. They leave just as the funeral starts. Ace asks the Doctor if they did good. He replies: Perhaps. Time will tell. It always does.

Doctor Who - Remembrance Of The Daleks - Special Edition [DVD]
£5.99 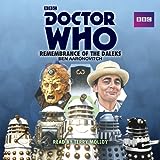 Doctor Who: Remembrance of the Daleks: A 7th Doctor novelisation
Not Availa

Doctor Who: Remembrance of the Daleks: A 7th Doctor Novelisation
Not Availa

Doctor Who: Remembrance of The Daleks, Episode 1
Not Availa