Resurrection of the Daleks

In London, 1984, a group of humanoids are gunned down by two policemen (Mike Braben, Michael Jeffries) using machine pistols. Two of the humanoids, Galloway (William Sleigh) and Quartermaster Sergeant Stien (Rodney Bewes), escape and return to a warehouse where a time corridor is situated. Galloway is killed, leaving the cowardly Stien alone.

Commander Lytton (Maurice Colbourne), who led the attack on Earth, transports back to his battle cruiser and prepares to attack a space station. On the station, the crew are demoralised and the equipment is malfunctioning. It is a prison station with just one prisoner.

The TARDIS is being dragged to Earth down a time corridor, but the Doctor manages to break free and materialise the ship on the banks of Londons river Thames alongside some warehouses. Exploring, the Doctor, Tegan and Turlough come across Stien, who takes them to see the time corridor entrance in one of the warehouses. Turlough vanishes and the Doctor, Stien and Tegan are found by Colonel Archer (Del Henney), Sergeant Calder (Philip McGough) and Professor Laird (Chloe Ashcroft), who are with some troops in the warehouse to investigate some strange cylinders that defy analysis.

Lyttons battle cruiser docks with the space station after knocking out its defences. Doctor Styles (Rula Lenska), Mercer (Jim Findley) and some other troopers defend the stations airlock but it is blown in by a group of invading Daleks. The initial attack is repelled, but the Daleks then use a gas to wipe out resistance and their second assault is successful. Osborn (Sneh Gupta) tries to kill the stations prisoner, but the destruct button malfunctions. She and a crew member (John Adam Baker) then go to the cryogenic cell to carry out the task in person, but are both killed before they can do so. Lytton revives the prisoner from cryogenic sleep. It is Davros (Terry Molloy).

The Daleks (John Scott Martin, Cy Town, Tony Starr, Toby Byrne; voices: Brian Miller, Royce Mills) know that the Doctor is on Earth. A Dalek is sent through the time corridor to capture him, and Turlough, who has got on board the Dalek ship, sees it leave. When the Dalek arrives on Earth its casing is destroyed by Archers men, but the mutant inside survives and Tegan is injured in the battle.

Styles suggests using the space stations self destruct mechanism. She and a couple of other crew members make their way to the self destruct chamber, where she manages to activate and set up the systems before she and her group are all killed by Lytton and his troops.

When Davros is revived it is explained to him that the Daleks lost their war against the Movellans. This was after the Movellans developed a virus which attacked only Daleks. The Daleks now need Davros to help them develop an antidote. Davros has his own ideas and initiates a technician, Kiston (Leslie Grantham), as his slave. Several troopers, a chemist (Nicholas Curry) and two Daleks are also recruited.

On Earth, the Doctor helps Archers men defeat an attack by the Dalek mutant, but Archer himself runs into Lyttons two policemen while trying to summon help. The Doctor and Stien go to the Daleks space craft in the TARDIS, but Stien turns out to be a traitor working for the invaders. The Doctor is captured and connected up to some equipment that will drain his memories. The Daleks plan to send duplicates of the Doctor, Tegan and Turlough to Gallifrey, where they will kill the members of the High Council of Time Lords. Stien  who is himself a duplicate  breaks down during the process and releases the Doctor.

Laird is killed by Archer and Calder, who have been duplicated, and Tegan is taken to the space station. There she meets up with Turlough and Mercer. They find the Doctor and Stien and all return to the TARDIS. The Doctor decides he must kill Davros, but when he confronts his enemy he find that he is unable to bring himself to do it. Tegan and Turlough return to Earth in the TARDIS, which the Doctor had set to automatic. Mercer is killed by a Dalek trooper when Stiens conditioning reasserts itself, and Stien then heads for the self destruct chamber. The Doctor meanwhile returns to Earth via the time corridor.

Davros and the Supreme Dalek send their respective groups of Daleks to Earth. The Supreme Daleks force are accompanied by Lytton, but have orders to kill him. A battle ensues between the two groups of Daleks in the warehouse, with Lytton and Archers duplicate troops getting involved as well. The Doctor releases a quantity of the Movellan virus, which destroys the Daleks. Lytton escapes with his two duplicate policemen.

Davros releases the Movellan virus on the space station but is himself overcome by it. However, there is a door to an escape pod nearby.

In the TARDIS, the Supreme Dalek appears on the monitor and informs the Doctor that duplicates have already been positioned on the Earth. The Doctor responds that they are unstable and will soon reveal themselves.

On the space station, Stien reaches the self destruct chamber. Several Daleks arrive and exterminate him, but he falls on the activating lever and the station and Dalek ship are both destroyed.

As the Doctor prepares to leave Earth, Tegan suddenly says that she is not going with him. She is tired of all the death. She runs off, but returns just in time to see the TARDIS leave.

Doctor Who: Resurrection of the Daleks
Not Availa

Doctor Who Revisitations 2 (The Seeds of Death / Carnival of Monsters / Resurrection of the Daleks)
£14.99

Doctor Who: Resurrection of the Daleks (Target Collection)
£12.99

Doctor Who: Resurrection of the Daleks (Target Collection)
£3.99 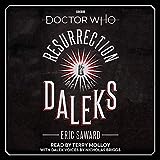 Doctor Who: Resurrection of the Daleks: 5th Doctor Novelisation
Not Availa

Doctor Who: Resurrection of the Daleks (Target Collection)
$17.35