Revelation of the Daleks

The TARDIS arrives on the icy surface of Necros, where the Doctor and Peri have come to attend the funeral of an old acquaintance of the Doctors, Professor Arthur Stengos. Stengos body is currently interred inside Tranquil Repose, a mortuary that provides an extra service: cryogenic storage of the bodies of the galaxys wealthy, who are frozen until such time as medical science can cure whatever killed them. Almost immediately upon arrival, however, the Doctor and Peri are accosted by a hideously deformed man (Ken Barker) who attempts to kill the Doctor. When Peri hits him, the man is suddenly freed of mental conditioning, forgives Peri and dies swiftly... but not before mentioning the Great Healer of Tranquil Repose. The Doctor tells Peri he is suspicious about reports of Stengos death, and the two head for the mortuary.

In reality, the Great Healer is none other than Davros (Terry Molloy), kept alive inside a cryogenic tank and served by Daleks who are the hidden security force of the mortuary. Davros contacts Kara (Eleanor Bron), a wealthy factory operator who supplies foodstuffs for much of a hungry galaxy. Davros owns shares of Karas factory, among others, and demands more money to continue his hidden researches.

Inside Tranquil Repose, Jobel (Clive Swift), chief embalmer, resists the advances of the timid Tasambeker (Jenny Tomasin) while preparing for the arrival of the Presidents wife, who is ill with a dreadful disease. While Jobel plots to ensure that nothing goes wrong when the Presidents ship arrives, two people arrive to retrieve the body of Stengos: Grigory (Stephen Flynn), a medical scientist, and Natasha (Bridget Lynch-Blosse), Stengos daughter. What they find, however, is a mannequin where Stengos body should be.

At Karas factory, her secretary Vogel (Hugh Walters) announces the arrival of Orcini (William Gaunt), a former member of the Knights of the Order of Oberon, now a paid assassin. Accompanied by his earthy squire, Bostock (John Ogwen), Orcini learns of Karas target: Davros, who is bleeding her factory dry. Orcini is anxious to accept the challenge, seeing this as a final mission of honor to avenge any past misdoings on his conscience. Orcini and Bostock head for the mortuary.

Deep in the mortuarys lower levels, Grigory and Natasha locate Arthur Stengos (Alec Linstead), encased in a Dalek frame. Apparently, the Great Healers plans include turning occupants of the mortuary into Dalek beings. The two are caught and interrogated by Jobels aides, Takis (Trevor Cooper) and Lilt (Colin Spaull).

The Doctor and Peri arrive, watched by Davros as they approach. The Doctor is nearly crushed by a statue on which is emblazoned his own face, while Peri resists the advances of Mr. Jobel.

Entering the mortuary, Jobel aids Peri to find the Tranquil Repose D.J. (Alexei Sayle), who is employed to entertain and inform those who are interred in the cryogenic chambers, while the Doctor is immediately stunned by Daleks and taken to the holding cell. There, he encounters Grigory and Natasha, who tells him of Stengos fate. The Doctor realizes that Stengos death and the statue of himself were merely parts of a ruse to lure him here, and he knows who is behind it. Suddenly, Orcini releases the Doctor and his party, though warning him not to follow on his quest to kill Davros.

Davros summons Kara and has Vogel killed. Orcini and Bostock attempt to defeat Davros, but discover that the countenance in the cryogenic chamber is merely a puppet... Davros is alive and well in his mobile wheelchair. Bostock is killed and Orcini is captured. Meanwhile, the Daleks attempt to take over the mortuary, and Peri is aided by the DJ, who unfortunately suffers an untimely death.

Tasambeker, who has been corrupted by Davros into hating Jobel, nevertheless attempts to warn him that he has displeased his Great Healer, but ends up killing him in cold blood when he spurns her. The Daleks then exterminate Tasambeker, aware of her betrayal.

Another party of Daleks arrive, those loyal to the Emperor Dalek... summoned by Takis and Lilt, who are aware of Davros identity and renegade status. A battle between Dalek forces soon begins, while the inhabitants of the mortuary attempt to flee.

The Doctor is captured again and brought to Davros, who tells him that he is creating a new Dalek army on Necros using the inhabitants of the mortuary, with the remainder ending up as raw food material for the galaxy. A stunned Orcini waits until the Doctor gives him a signal and defeats Davros, who flees. Orcini, who is carrying a device that will blow the mortuary apart, elects to remain behind to make certain of its destruction. Takis and Lilt, aware of their misjudgement, arrive with Peri as the Doctor bids farewell to Orcini, then the group flees Davros chamber for the surface. Orcini activates the bomb, which destroys him and the lower levels of Tranquil Repose... and destroys Davros new Dalek creatures in the process.

Aware that Tranquil Repose will never rise again, the Doctor and Peri bid Takis and Lilt farewell, telling them and the other members of the mortuary staff that they should take up farming; the blue flowers that grow all over Necros can replace the food supply destroyed in the fall of the plant. Peri bids the Doctor to take her somewhere on holiday; the Doctor knows just the place...

Doctor Who: Revelation of the Daleks (Target Collection)
£12.99

Doctor Who: Revelation of the Daleks (Target Collection)
£4.99 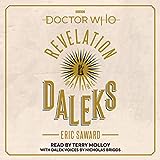