The once prosperous and peaceful planet Karfel stands on the brink of destruction. It is ruled by a ruthless dictator, the Borad (Robert Ashby), whose insane leadership has brought the Karfelons to the edge of a war they cannot win against their former allies, the Bandrils.

Some of the citizens within the Citadel cannot understand why their mysterious leader, whom they only ever see on the video screens, should want to provoke a war. Any spark of unrest amongst the people is however quickly crushed by the blue-faced androids which do the bidding of their cruel ruler.

When Maylin Renis (Neil Hallett), the current second-in-command to the Borad, is killed for insubordination, his daughter Vena (Jeananne Crowley) is horrified. Her fiancé, Mykros (Eric Deacon), tells her that the Borad's power lies in the symbolic amulet worn by the Maylin. When Tekker (Paul Darrow) announces himself as Renis's successor, Vena rips the amulet from his neck and, in doing so, accidentally falls into the Timelash. This is a kontron tunnel  a time corridor  into which the Borad banishes those who would fight his will, and which the Karfelons fear more than death itself.

The TARDIS has been caught in the Timelash and Vena passes through it as she travels down the time corridor. The corridor originally terminated in the year 1179, but the TARDIS's presence has the effect of diverting her to 1885.

The Doctor materialises on Karfel to see what is going on and is warmly welcomed by Tekker. He is remembered with affection here from a visit he made during his third incarnation, when he saved the Karfelons from a disaster. While she and the Doctor are being entertained by Tekker, Peri is surreptitiously given a cryptic message: 'Sezon at the Falchan Rocks.' Tekker, unaware of this, suggests that she take a look around. When she has gone, he uses threats against her in order to blackmail the Doctor into going in search of Vena in the TARDIS.

Vena arrives safely at the end of the time corridor and finds herself in a small cottage in the Scottish highlands near Inverness. The cottage is currently the residence of a young writer called Herbert (David Chandler) who, although startled by her sudden appearance, is enough of a gentleman to try to help her when she collapses. The Doctor then arrives in the TARDIS, scaring the writer even more, and persuades Vena to return to Karfel with him. Having noticed that there are no reflective surfaces in the Citadel, he also appropriates a hand-mirror.

Peri meanwhile is chased by Guardoliers  the Borad's force of guards  and finds herself in the caves under the city. She is rescued from a Morlox  a reptilian creature with a long, snake-like neck  by Katz (Tracy Louise Ward) and Sezon (Dicken Ashworth), rebels who explain that the Borad plans to wipe out all the Karfelons by instigating a war with the Bandrils. If the Bandrils strike the planet with a benalypse warhead, all life with a nervous system will be destroyed, although the buildings will remain intact, as will the Morlox. The rebels are attacked by Guardoliers and taken prisoner. Peri is confined in a cell while the others are sentenced to death by Timelash.

The Doctor returns to Karfel with Vena, the amulet and also Herbert, who stowed away on board the TARDIS. Once Tekker has the amulet he orders that the Doctor be thrown into the Timelash. The Doctor, however, uses the hand-mirror to distract the android guard (Dean Hollingsworth) and the rebels attack the Guardoliers, seizing and securing the Timelash control room. The Borad orders an attack using the power from his time-web.

The Doctor determines that he needs some kontron crystals and, attached to a rope, enters the Timelash to obtain them. He gets two crystals and converts one into a ten second time break: it slips the Doctor ten seconds into the future while projecting an image of him in the present. The other he uses to create a device which will reflect any weapon's power back to its source.

The control room comes under attack from the Guardoliers and from the Borad's android, but the android is destroyed and the Doctor's time break sends it into the past. During the battle, a section of wall panelling is smashed, revealing underneath it a large painting of the Doctor in his third incarnation.

The Doctor goes to confront the Borad and discovers that he is the mutated form of a scientist named Megelen, whom he had previously reported to the inner sanctum for unethical experimentation on the Morlox. Megelen admits that he had been experimenting further when he was accidentally sprayed with a substance called Mustakozene 80; this excited a Morlox into attacking him and resulted in spontaneous tissue amalgamation, forming the combined mutant creature which he has now become. The Borad explains that he now intends to wipe out all mammalian life on Karfel. When Tekker, who has been listening, objects, the Borad kills him.

Peri has been tied to a stake within the tunnel system with a canister of Mustakozene 80 strapped to her, to await the approach of a Morlox.

The Borad reveals Peri's fate to the Doctor  she is to be transformed into a Morlox mutant like him and become his mate. The Doctor uses the kontron crystal first to avoid the Borad's ageing time-web ray, then to reflect it back at the Borad, killing him. Herbert, who was left by the Doctor to watch the confrontation from a nearby window, is told to go and rescue Peri. He arrives just in time to frighten off a Morlox with a burning torch.

Karfel still faces destruction as the Bandrils have fired a missile at it. The Doctor leaves in the TARDIS, with Herbert as an uninvited passenger, and positions the ship in the missile's path, thereby saving the planet.

The Karfelons, who believe the Doctor and Herbert to have been killed, contact the Bandrils and start peace negotiations. The Bandrils agree to send an ambassador to Karfel. While everyone is indulging in mutual congratulations, Peri is suddenly grabbed by the Borad. The Doctor had not killed him after all, but merely disposed of one of his clones.

The Borad wants the Bandril ship captured but is distracted when the Doctor and Herbert return, having survived the missile attack unscathed. The Doctor smashes the painting of himself on the wall, revealing a mirror beneath it, and the Borad recoils in horror at the sight of his own reflection, causing him to release his grip on Peri. The Doctor then quickly activates the Timelash and pushes the Borad into it, surmising that he will arrive on Earth in the twelfth century and live for a thousand years or so in Loch Ness. The Doctor tosses his kontron crystal into the Timelash, which blows itself up.

With Karfel safe, the Doctor prepares to return Herbert to Earth. He shows Peri one of Herbert's calling cards. It reads 'Herbert George Wells.' 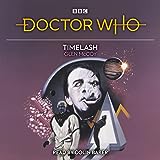