The ship has arrived in a petrified forest on an apparently dead planet. Exploring, the travellers see a fantastic city in the distance. The Doctor wants to investigate further, but Ian and Barbara veto this idea, insisting that they return to the TARDIS. The old man eventually gets his own way by resorting to a trick: he claims that one of the ship's vital components, a fluid link, needs refilling with mercury, and that the only place this might be found is the city.

On reaching the city, the travellers split up to explore. The Doctor, Ian and Susan discover a chamber containing a detector which indicates a dangerous level of radiation in the atmosphere. The Doctor now admits the trick he has played and urges a swift return to the ship. Ian, however, is adamant that they cannot leave without Barbara. Barbara has meanwhile been taken prisoner by the city's inhabitants, the Daleks (Robert Jewell, Kevin Manser, Michael Summerton, Gerald Taylor, Peter Murphy; voiced by Peter Hawkins and David Graham). Soon the others are captured as well.

The travellers eventually learn that they are on the planet Skaro and that its current devastation is the result of a nuclear war fought some 500 years ago between two indigenous races, the Dals and the Thals. The Daleks are the Dals' hideously mutated descendants, now living in metal life-support casings. The Thals, on the other hand, have undergone a full cycle of mutation and are now physically perfect humanoids.

The Thals are starving and hope that the Daleks will be willing to let them have food, but instead they are ambushed and their leader Temmosus (Alan Wheatley) exterminated. The travellers manage to escape and join the remaining Thals at their camp. There the Doctor realises that the fluid link is still back in the city, and that without it he and his companions are trapped on Skaro. Ian, although initially resistant to the idea, eventually agrees that they must persuade the Thals to abandon their pacifist principles and fight for their survival by attacking the Dalek city. The Thals' new leader, Alydon (John Lee), is at first unwilling to take such action, but is finally persuaded when Ian claims that he is prepared to present the Thal woman Dyoni (Virginia Wetherell) to the Daleks in return for the fluid link.

A two-pronged attack is mounted: while the Doctor, Susan and the main party of Thals keep the Daleks' scanners distracted at the front of the city, Ian, Barbara and the Thal men Elyon (Gerald Curtis), Ganatus (Philip Bond), Kristas (Johnathan Crane) and Antodus (Marcus Hammond) make a perilous journey through mutation-infested swamps and treacherous mountain caves to attack from the rear. The Daleks, meanwhile, abandon plans to detonate another neutron bomb to wipe out the Thals once and for all, as the bomb will take too long to construct. Instead they plan to release radiation from their nuclear reactors into the atmosphere.

A final confrontation takes place in the Daleks' control room. During the course of the skirmish, damage is inflicted which halts the countdown to the release of radiation and causes the Daleks' power to fail. With the Daleks seemingly dead, the Doctor and his companions bid farewell to the Thals and depart from Skaro in the TARDIS. Once the ship is in flight, however, the control room is rocked by an explosion which throws the four travellers to the floor and plunges them into darkness.

Doctor Who and the Daleks: In an Exciting Adventure With the Daleks
£9.99

Doctor Who: The Daleks, The Dead Planet
Not Availa 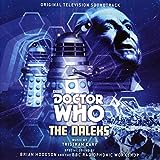 Doctor Who: The Daleks (Original Soundtrack)
$34.58 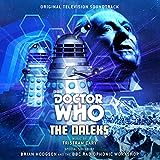 Doctor Who: The Daleks (Gatefold Sleeve) [Vinyl]
Not Availa