Hovering in space around the year 5000 AD, the TARDIS enters a cloud of energy which shoots lightning-like tendrils into its systems and from there into the Doctor's mind. He has been infected by the Virus, a space-borne intelligence which wishes to spread itself across the universe.

The TARDIS arrives on Titan, one of the moons of Saturn, where a refuelling station has also been taken over by the Virus. The Doctor manages to relay the coordinates of a local hospital asteroid to Leela before he collapses.

At the Bi-Al Foundation, based on asteroid K4067, Professor Marius examines the Doctor and pronounces that there is little he can do. However the Doctor devises a plan whereby he clones himself and Leela, miniaturises the clones using the relative dimensional stabiliser from the TARDIS, and then has them injected by Marius into his body, where they have to find and destroy the Virus Nucleus.

The plan backfires as the Nucleus escapes from the Doctor in place of the clones and is enlarged to human size. The creature arranges for itself to be taken back to Titan where breeding tanks have been prepared prior to its invasion of the galaxy.

The Doctor, now cured of the Virus's influence, arranges with the help of K-9, Professor Marius's dog-shaped robot computer, for the breeding tanks to be blown up, thus killing the Nucleus.

Marius gives K-9 to the Doctor as a parting gift as the Professor is returning to Earth. 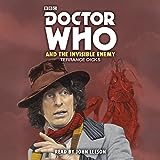