The Monster of Peladon

The TARDIS returns to the planet Peladon which the Doctor has been intending to revisit for some time. It is about 50 years after his last visit and the planet is unsettled. There is a war with Galaxy 5 in progress and Peladon is rich in the mineral trisilicate which is needed for the war. The Pel miners (Roy Brent, John Cannon, Eden Fox, Bill Haydn, Chris Holmes, Tom O'Leary, Ifor Owen, Paul Phillips, Ivan Santon, Max Faulkner) are refusing to operate new equipment brought in by the Federation. Queen Thalira (Nina Thomas) and her High Priest Ortron (Frank Gatliff) are trying to convince them that the equipment is safe. It appears that the spirit of Aggedor is working against them, however, as his image has appeared to and killed several miners. The latest victim is the alien mining expert Vega Nexos (Gerald Taylor), when he and engineer Eckersley (Donald Gee), demonstrate a new sonic lance to speed up the mining process.

Gebek (Rex Robinson), who represents the miners, is open minded about the technology, but another miner, Ettis (Ralph Watson), wants to use force to return Peladon to the old ways.

The Doctor and Sarah are captured but luckily Alpha Centauri (Stuart Fell; voice: Ysanne Churchman) is still on Peladon in an ambassadorial capacity and vouches for the Doctor. Ettis and a group of miners try and break into the planet's armoury but cannot get through the doors which are electronically controlled from the communications room. Ettis sends Preba (Graeme Eton) to try and get them open but he is captured. This action discredits Gebek and Ortron orders Gebek and Preba executed. The Doctor helps them to escape and persuades the Queen that Gebek is her only chance of peace with the miners. He goes with Blor (Michael Crane), the Queen's champion, to check the cave where the spirit of Aggedor last appeared. Ettis uses the sonic lance to trap the Doctor and Blor inside. The image of Aggedor appears and Blor is killed.

When Gebek realises what Ettis has done, he rescues the Doctor as Aggedor appears once more. Sarah, hearing a message in the communications room, goes to find the Doctor in the caves. She gets lost and finds herself by the new Federation refinery. She sees someone moving inside but is then knocked unconscious by the automatic defence system. Eckersley sees her from the communications room and goes to help her.

The Doctor wants the miners to wait and to work normally while he investigates the situation. Gebek agrees, but when they have gone, Ettis plans another attack on the armoury.

Gebek is arrested and the Doctor helps him to escape. Ortron proposes that the rebellion must be crushed and that the Doctor must be captured and executed. Meanwhile Ettis goes to the communications room, where he gets Alpha Centauri to open the armoury door. He then leaves, taking Sarah hostage. Sarah escapes but is captured by Ortron, who accuses her of conspiring to overthrow the Queen. When the Doctor arrives to try and make Ortron see sense, the High Priest condemns them both to be punished by Aggedor. He opens a pit in the temple floor and the Doctor and Sarah are pushed in.

The guard captain (Terry Walsh) tells Eckersley and Alpha Centauri that Sarah has been captured by Ortron and they try and get the Queen to intervene. Thalira can do nothing. She goes to talk to Ortron herself, but arrives too late to save the Doctor and Sarah.

In the pit, the Doctor calms the real Aggedor (Nick Hobbs) with a spinning pendant and demands that he and Sarah be released. The Queen orders Ortron to comply. The Doctor again tells the Queen to talk to Gebek and she asks him to arrange a meeting. Ortron, however, orders the Doctor not to leave the Citadel. When he tries to do so, the High Priest has him arrested and thrown in a dungeon. Sarah delivers the Queen's message to Gebek instead.

Eckersley suggests that Alpha Centauri contact the Federation for support. The sonic lance is captured by Ettis. Sarah and Gebek go to see the Queen and find that Alpha Centauri has summoned Federation troops. Sarah reasons that the troops will leave if all seems normal and Ortron manages to persuade the miners to go along with this.

Alpha Centauri receives a message from the Federation troops. They are in orbit and will arrive shortly. Gebek frees the Doctor from the dungeon and they go to investigate the refinery, following Sarah's assertion that she saw someone in there. The Doctor opens the door and they are confronted by an Ice Warrior.

The Ice Lord Commander Azaxyr (Alan Bennion) arrives and states that the planet is under martial law. He wants the miners to work under threat of death and takes hostages who will be killed every hour until the miners are working again. He threatens that the planet will be destroyed unless trisilicate is being delivered.

Azaxyr has the Warrior, Sskel (Sonny Caldinez), take the Doctor, Sarah, Eckersley and Alpha Centauri to the communications room. Azaxyr agrees to allow the Doctor to try and persuade Gebek to get the miners working again and Sarah realises that it was Sskel that she saw in the refinery - these are not the troops that Alpha Centauri thought were being summoned. The Doctor goes to talk with Gebek.

The Doctor wants Gebek to tell the miners to pretend to co-operate to give him time to deal with the Ice Warriors (David Cleeve, Terence Denville, Alan Lenoir, Kevin Moran). He then raises the temperature in the mines which will dull the Warriors' senses and allow the miners to attack them.

In the mines, Ettis tells a miner named Rima (Roy Evans) that he has the sonic lance pointed at the citadel which he intends to destroy.

When the miners attack the Warriors, the Doctor learns from Rima about Ettis' plan and goes to try and stop him. Azaxyr has set the lance to self destruct, and watches on a monitor as the Doctor and Ettis fight. Ettis activates the lance and it explodes, apparently killing Ettis and the Doctor. The Doctor is not dead, however, and, when he recovers, goes to find Gebek. They head for the refinery.

Azaxyr switches off the heat in the mines and cuts off the air supply instead, which is controlled from the refinery. Ortron is killed and Thalira is held prisoner as an escape is attempted from the throne room. Alpha Centauri and Sarah manage to get to the communications room where Alpha Centauri sends an SOS message. Sarah sees Azaxyr and Eckersley talking in the refinery on the monitor screen and discovers that they have been working together in a plot to supply trisilicate to Galaxy 5. Eckersley has a statue of Aggedor which he is moving round the mines using a matter projector linked to a directional heat ray to kill the miners.

Outside the refinery, the Doctor also overhears Azaxyr and Eckersley and Sarah sees him on the monitor. She goes to join him and her appearance outside the refinery allows Gebek to knock out the guarding Warrior. Azaxyr, who has returned to the communications room, sends Sskel to stop the Doctor getting into the refinery. The Warrior arrives too late and starts to burn through the refinery door, but the Doctor uses the Aggedor statue to stop him.

With Aggedor now on their side, the miners attack the Warriors. Eckersley uses the defence system to try and stop the Doctor. It works, but only after a long period, and the Doctor is apparently killed once more. The miners storm the throne room where Azaxyr is holding the Queen hostage. They struggle and Azaxyr kills Sskel by accident. The Ice Lord is then fatally stabbed by one of the Queen's guards (Gordon Black, Derek Chafer, Pat Gorman, Chris Hodge, Steve Ismay, Tony Lord, David Rolfe).

When Eckersley makes his escape, Sarah goes to the refinery where she finds that the Doctor is not dead - he had put himself in a coma when the defence system became too much to cope with. Eckersley kidnaps the Queen and drags her through the tunnels to his space shuttle on the other side of the mountain. The Doctor uses the real Aggedor to track Eckersley down.

Aggedor attacks Eckersley but he kills the beast before he is himself killed.

The Queen wants the Doctor to stay on as advisor, but the Doctor instead suggests Gebek for the role. Alpha Centauri reports that the war with Galaxy 5 is over and they are keen to negotiate peace now that they realise that their supplies of trisilicate are not going to be arriving. Gebek reports that the TARDIS has been found and the Doctor and Sarah leave. 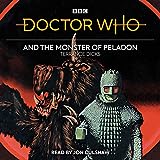 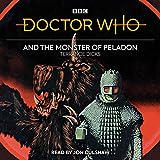 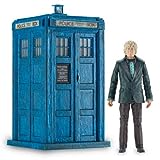