The Robots of Death

Leela and the Doctor arrive in the scoop of a massive sandminer, Storm Mine 4, which is combing an alien world for precious ores (lucanol and zelanite amongst others) for the controlling company.

The miner is run by Commander Uvanov and his small human crew aided by numerous robots which are split into three classes: in overall control is a single Super Voc, under him come the Voc class robots, and at the bottom of the hierarchy are the mute Dum robots. Almost as soon as the Doctor and Leela escape from the scoop and into the main part of the ship, just prior to a sandstorm, mysterious deaths start to occur, beginning with the strangulation of mineralogist Chub.

The humans are picked off one by one by an unknown and unseen killer. The remaining crew immediately suspect the Doctor and Leela, but the time travellers are able to convince Chief Mover Poul, a government agent working with D84, another Super Voc posing as a Dum, that they are not the killers.

The culprit is revealed to be one of the human crew, Chief Fixer Dask, who is in reality the scientist Taren Capel. Capel was raised by robots and regards them as superior to humans. He has been reprogramming the robots on the mine to kill the humans leaving a totally robot community.

The Doctor manages to trick Capel into outlining his plans for conquest while a helium canister discharges itself into the room. Capel's voice is altered by the gas, and a rogue SV7 kills him as it cannot recognise its master's voice and has been ordered to kill all other humans.

Doctor Who Revisitations 3 (The Tomb of the Cybermen/The Three Doctors/The Robots of Death) [DVD]
£14.99 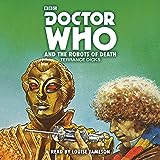