The Doctor and his companions are enjoying a rare holiday from their travels, resting up in a vacant villa not far from Rome in 64 AD. However, the Doctor soon becomes restless and sets off to visit the city, taking Vicki with him. In their absence, Ian and Barbara are kidnapped by a band of slave traders led by a man named Sevcheria (Derek Sydney) and his deputy Didius (Nicholas Evans).

Having been mistaken for the famous lyre player Maximus Pettulian (Bart Allison) and asked to perform at the Court of the Emperor Nero (Derek Francis), the Doctor is forced to devise ever more elaborate schemes to avoid revealing that he cannot actually play the instrument.

Barbara is presented at a slave auction and bought by Tavius (Michael Peake) as a servant for Nero's wife, the Empress Poppaea (Kay Patrick). Ian is meanwhile sold as a galley slave, but the galley sinks in a storm at sea and he and a Greek friend named Delos (Peter Diamond) manage to escape and make their way to Rome. There he is eventually reunited with Barbara, who is helped to escape by Tavius, now revealed to be an early Christian.

Events reach a climax when, by accidentally setting light to the Emperor's plans for the rebuilding of Rome, the Doctor gives him the idea of having the city razed to the ground. Nero sits playing his lyre while Rome burns around him. The four time travellers escape back to the villa, the Doctor and Vicki knowing nothing of the adventures experienced by Ian and Barbara and vice versa.

The Romans: Conspiracy
Not Availa 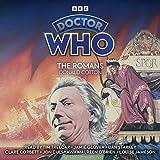