By 1996, the world was ready for a new Doctor. Paul McGann stepped into the role of the Doctor, with a sendoff sequence by Sylvester McCoy (reprising the role), for a joint US/UK production of "Doctor Who". Facing off against the Master (Eric Roberts) with the help of Dr. Grace Holloway (Daphne Ashbrook) and Chang Lee (Yee Jee Tso), the Doctor was a sure bet -- until the might of American TV ratings quashed all hope; the UK ratings were rather good at 9.06 million viewers, but sadly US televisions barely registered. Once again, Doctor Who was but a television memory.

But in 1997, BBC Books took over the mantle of Doctor Who publishing, producing monthly adventures of the new Eighth Doctor and his new companions: London runaway Samantha "Sam" Jones, Liverpudlian Fitz Kreiner, Faction Paradox agent Compassion (nee Laura Tobin), London securities broker Anji Kapoor, and a stowaway newcomer in 2003, Beatrix "Trix" MacMillan. In the midst of his travels, the Doctor lost his memory and his homeworld of Gallifrey and found himself battling against a new foe, Sabbath.

Meanwhile, in 1999, Big Finish Productions acquired the license to produce new audio adventures, with Peter Davison, Colin Baker and Sylvester McCoy stepping into the role of the Doctor alongside former companions and enemies... and, in a major shock, McGann himself also returned, taping several "seasons" of Doctor Who tales for Big Finish alongside audio companions Charlotte "Charley" Pollard (India Fisher) and alien C'rizz (Conrad Westmaas). McGann also returned for the third BBCi webcast, a new version of "Shada" -- the Douglas Adams-written serial for season 17 originally starring Tom Baker, abandoned in the middle of recording in 1979 due to an industrial strike -- alongside original actors Lalla Ward (Romana) and John Leeson (K-9).

Gone, but not forgotten, McGann continues to be a favorite Doctor even to this day, and while he's no longer considered the "current" Doctor due to the new movie, there are always avenues and further adventures for the Eighth Doctor.

Doctor Who Revisitations, Vol. 1 (The Caves of Androzani / The Talons of Weng-Chiang / Doctor Who: T
£14.53 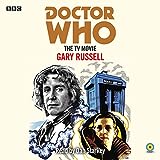 Doctor Who: The Movie
Not Availa

Doctor Who: The Movie
Not Availa