A man named Dave (Damon Jeffery) is washing his car in a quiet suburban street when something appears before him. He tries to run, but vanishes from sight. The TARDIS arrives at the end of the street. The Doctor has brought Ace back to Perivale as she wanted to see how some of her old gang were doing. They head for the youth club where Sergeant Paterson (Julian Holloway), who has been teaching the art of survival to a group of lads (Nick Ferranti, Simon Horrill, Humph James, Keith Macey, Dominic Martinez, Jimmy Morris, Michael Savva, Lee Towsey), tells them that kids from the area keep vanishing. The Doctor is more concerned by a black cat that seems to be watching them.

The Doctor and Ace go to Perivale High Street where the Doctor buys some cat food and cheese from a supermarket run by Len (Gareth Hale) and Harvey (Norman Pace). Ace bumps into one of her friends, Ange (Kate Eaton), who tells her that she hasnt seen any of the others lately. The Doctor is thoughtful and wanders off to try to catch a cat. He opens some cat food in the street and then hides and waits.

Ace makes her way to a childrens play area. She finds a black cat and, after it runs off, is suddenly confronted by a humanoid cheetah person on horseback. She is chased around the play area and shouts for the Doctor. Suddenly there is a flash of light and she finds herself on an alien planet, where she discovers the dead body of the man seen earlier washing his car.

The Doctor arrives to find the play area deserted. He returns to his bait and sees a black cat, which he pursues. He is hampered by Paterson, who chases after him in the belief that he is causing a public nuisance.

Ace is chased by a cheetah person on horseback. She manages to get away with the aid of a boy, who is killed and taken by the Cheetah Person. She then meets her friends Shreela (Sakuntala Ramanee), Midge (William Barton) and Derek (David John), who are hiding out, and determines to go on the offensive.

The Doctor climbs a wall to get to the cat, but Paterson follows him. They fall from the wall and arrive on the alien planet, in the middle of the cheetah peoples camp. The creatures (Emma Durrell, Susan Goode, Damon Jeffrey, Samantha Leverett, Leslie Meadows, Basil Paton, Lee Towsey, Adel Jackson) herd them to a tent wherein sits the Master (Anthony Ainley), his eyes glowing yellow. The Doctor resists the Masters attempts to goad him into running, but Paterson is not so strong willed and is caught and tormented by the Cheetah People. The Doctor manages to grab a horse, rescue Paterson and escape.

Ace has meanwhile set up some traps for the cheetah people. One of these fails when a cheetah person sees and disables it, and another captures only the Doctor and Paterson.

The Doctor determines to get everyone to a safe area beyond the cheetah peoples camp and explains that the planet is on the point of breaking up. Warning them not to run, he starts to lead them through the camp. Suddenly a milkman (Jack Talbot) appears, exciting the cheetah people and panicking the humans. Everyone but the Doctor runs, and the cheetah people attack. Paterson and Midge manage to free Derek by throwing rocks at the creatures, Ace captures a horse and Shreela helps Derek to get away.

Ace finds herself by a lake and watches as an injured cheetah person arrives on the other side. It collapses and she goes to its aid, speaking to it and bringing it water from the lake.

The Doctor encounters the Master by some ruined buildings. The Master explains that the cheetah people are linked to the planet; when they fight each other, they bring it closer to destruction. He wants the Doctor to find a way out of the situation. He himself has been infected by the planet and is gradually transforming into a cheetah person.

The Doctor finds Ace and tells her that they need an animal whose home is Earth in order to return there. The Master overhears this and prepares a leash by stripping some skin from a dead animal. Ace confesses to the Doctor that she likes the planet and feels as if she could run forever. She is also starving hungry. They meet up with the others. Midge attacks Derek but runs off, his eyes glowing yellow, when the Doctor intervenes. He then encounters the Master who puts him on the leash and tells him to go hunting. He vanishes, taking the Master with him.

The Doctor tells Ace and the others that they must wait until one of them succumbs to the planets influence and then use that person to get them home. The cheetah person that Ace helped by the lake returns. Ace is pleased, and when she looks back at the Doctor her eyes are glowing yellow. The cheetah person asks Ace to come hunting and they run off together, the Doctor giving chase.

On Earth, the Master muses that if he has to become an animal, then like an animal he will destroy the Doctor.

Ace speaks to the cheetah person, Karra (Lisa Bowerman), and wonders why she called her sister. She sees her yellow-eyed reflection and realises that she must get back to the Doctor. Karra tempts her with the hunt for food, but she resists this and returns with the Doctor to the others. The Doctor explains to Ace that if she helps them to escape, she may never change back. They all link hands, and Ace transports them back to Earth. Shreela and Derek run off, but Paterson refuses to acknowledge that anything out of the ordinary has happened.

Ace wants to leave in the TARDIS but the Doctor insists they sort out the Master and Midge. They visit Midges home and find a slaughtered cat and a young girl, Squeak (Adele Silva), who shows them the direction in which the Master and Midge went. Aces eyes glow, and she senses that Midge is at the youth club.

The boys at the youth club are hypnotised by the Master, and when Paterson arrives they kill him. The Doctor and Ace catch up with them on a nearby hill. There the Doctor and Midge confront each other in a motorbike duel, riding directly at each other at high speed. There is a massive explosion as the bikes collide. Midge dies after the crash, but the only trace that Ace can find of the Doctor is his hat. The hypnotised boys approach, but she realises that she cannot fight them  the Doctor has warned her that if she does so she will be permanently transformed. She shouts for help. Karra appears on horseback and chases the boys away, but the Master then stabs her with an animal tooth. Ace screams.

The Master, leaving the scene, passes the Doctors body lying in a rubbish heap. The Doctor is still alive and, recovering, he returns up the hill. He finds Ace crying over Karra, who has transformed into a young woman. Karra wishes Ace good hunting, then dies.

The Doctor encounters the Master waiting for him by the TARDIS. The Master is still infected and feels the power from the planet growing in him. He grabs the Doctor and they are both transported back to the planet, which is visibly more unstable than before. They struggle with each other, but the Doctor realises that they must stop. The Master claims that they cannot escape and goes to deliver the fatal blow. At the last moment however the Doctor is suddenly transported back to Earth. He finds himself by the TARDIS being berated by a housewife (Michelle Martin) about the noise of his shouting.

Ace looks on as another cheetah person appears on horseback, picks up Karras body and then vanishes again. The Doctor arrives and retrieves his hat and umbrella from Ace. Ace is pleased when he confirms that the cheetah planet will live on inside her. They turn and walk back to the TARDIS together. More adventures beckon... 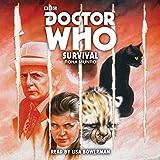 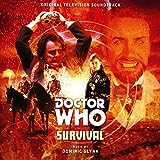 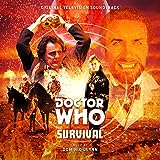