The TARDIS materialises on a rocky coastline in the shadow of a volcano. The travellers set off to explore but are accosted one by one by an unseen assailant and thrown into a dark room within a cave. The room starts to descend below sea level and the Doctor realises that it is also filling with compressed nitrogen. The travellers pass out before it comes to a halt. When they regain consciousness, Ben realises that it must be a compression chamber. The Doctor speculates they have been captured by Troglodytes - an ancient North African tribe that lived in caves - but Polly believes that the year is somewhere around 1970 as she has found a bracelet bearing an inscription apparently referring to the Mexico Olympics of 1968. A man holding a trident arrives and ushers them into another room containing a table laden with food, which the Doctor declares to be delicious plankton. A priest named Ramo (Tom Watson) enters accompanied by guards. He announces that the travellers' arrival was foretold by the living goddess Amdo, who said that they would fall from the sky in time for the vernal equinox. The Doctor realises that they are to be sacrificed and demands to speak. He is granted five minutes. The others are taken away. The Doctor asks that he be allowed to send a note to Professor Zaroff (Joseph Furst), whose involvement he has guessed as no-one else could have created the plankton-based food. Ramo refuses, but before being to led away the Doctor persuades a young serving girl called Ara (Catherine Howe) to take his note to Zaroff.

Ben, Polly and Jamie have been taken to a temple. On Ramo's orders they are bound and placed on three of the four slabs surrounding a shark-infested well. Their hopes of rescue are dashed when the Doctor is led in and placed on the fourth slab. The temple priests and acolytes begin to chant and the slabs swing slowly upwards, sliding the four friends toward the well.

Ara takes the Doctor's note to Zaroff's assistant, Damon (Colin Jeavons), who passes it to his superior. It reads: 'A vital secret will die with me. Dr. W.'. Zaroff rushes into the temple and orders Ramo to halt the sacrifice. The Doctor is released and Zaroff asks him about the secret. The Doctor refuses to say anything until his friends are also released. Zaroff eventually relents and orders that Ben, Polly and Jamie be handed over to Damon. The Doctor now admits that he has no secret. Zaroff is initially angry but then laughs and tells the Doctor that he has need of a man like him. They leave together.

Damon sends Ben and Jamie to work in the mines. Polly sees two strange figures swim into view on a large viewing screen. Damon explains that these are humans who have been surgically altered to use gills to breathe under water. He tells Polly that she will undergo the operation and become one of these fish people who tend the undersea food producing areas.

The Doctor discovers that they are in Atlantis. Zaroff reveals that he has promised the Atlanteans that he will raise their city to the surface. When Zaroff is briefly called away, the Doctor learns from Ara of Polly's forthcoming operation. He surreptitiously tinkers with some switches and thus manages to cut off the power to Damon's operating theatre, allowing Ara to rescue Polly. He then questions Zaroff about his plans to raise Atlantis, claiming that the city is too heavy. The Professor states that if he cannot raise Atlantis he will lower the ocean level by draining the water through a fissure in the Earth's crust. The Doctor retorts that the super-heated steam thus created will destroy the Earth. The insane Zaroff agrees, boasting that it will be his most magnificent achievement.

Ben and Jamie are taken by the mine overseer (Graham Ashley) to join the other miners - also prisoners. They meet Sean (P. G. Stephens) and Jacko (Paul Anil), who reveal that the Atlanteans' plankton-based food quickly spoils if not eaten. They also discover that the two men are planning an escape through a tunnel that the miners have discovered.

Ara takes Polly back to the temple and hides her in a secret chamber behind the statue of Amdo. The Doctor escapes from Damon by incapacitating him with noxious gas created by mixing two chemicals in Zaroff's lab. He meets Ara again and asks her to take him to the Chief of State. She agrees but warns him that he will be recaptured. They both hide as Ramo and Damon approach. Ramo asserts that Zaroff should never have been allowed to enter Atlantis but Damon is convinced that without him the city will never rise from the sea. At the Doctor's request, Ara emerges from their hiding place and distracts Damon by telling him that she has seen Polly in the market place. He races off to find her. The Doctor then tries to convince Ramo of Zaroff's true intentions. Although suspicious, the priest eventually asks him to tell his story to Atlantis's ruler. Polly is meanwhile reunited with Ben and Jamie, who have accompanied Jacko and Sean through the tunnel from the mines and emerged in the secret chamber behind the statue.

The Doctor is presented by Ramo to Thous (Noel Johnson), the ruler of Atlantis, and tells him that Zaroff is insane and plans to destroy them all. Thous is sceptical and hands them both over to the grinning Zaroff, on whose orders they are taken to the high priest Lolem (Peter Stephens) and prepared for beheading in the temple. Just before the giant sword falls on their necks a voice booms out from the statue of Amdo, ordering the priests and acolytes to bow down and not to look at the sacrifice. The Doctor realises that this is a trick and pulls Ramo toward the secret chamber behind the statue. When Lolem finally looks up and sees that the men have gone he declares it a miracle.

Zaroff promises Thous that he will complete his task of raising Atlantis within two days. Lolem enters to tell them of the miracle but Zaroff is suspicious and asks Thous to order his guards to search Atlantis. The ruler reluctantly agrees.

The Doctor tells his friends and the two miners that they must attack Zaroff. They decide to try to get the fish people (Cathy Ash, Derek Calder, Nigel Clayton, Alex Donald, Perrin Lewis, Mary Mc Millen, Judy Nicholls, Tony Starr) to help. Some time later the time travellers meet up again in the market place. A friendly carpet merchant named Nola (Roma Woodnutt) hides Polly under her carpets as some guards go by. Ben and Jamie, disguised as two of the guards, tell the Doctor, himself disguised as a gypsy musician, that the Professor is on his way to the market. When Zaroff arrives the Doctor breaks cover. He is chased by Zaroff, Ben and Jamie into the temple, where Ramo is waiting for them.

Jacko and Sean talk to a group of fish people and persuade them to go on strike. Soon all work in the food producing areas has stopped.

Held prisoner by the Doctor and his friends, Zaroff claims that an atomic reactor is already running in the fissure in the Earth's crust and his plan is unstoppable. He then collapses, having apparently suffered a heart attack. The Doctor, Ben and Jamie leave to ensure that the Professor's plan does not succeed. Polly and Ramo remain to guard Zaroff. The Professor, who was merely feigning illness, stabs Ramo with a spear and takes Polly hostage. The Doctor, Ben and Jamie return, having realised that they will need Ramo to guide them, and discover that the priest is mortally wounded and Zaroff and Polly are gone. The Doctor and Ben head for the lab while Jamie goes after Zaroff and Polly.

Polly escapes and meets Jamie, who fights off the pursuing Zaroff. In his throne room, Thous discusses the striking fish people with Damon. He decides to see a delegation to hear their demands. At that moment Zaroff bursts in. He tells Thous that his guards will shoot any of the fish people who refuse to work. Thous is horrified and tries to have Zaroff arrested but the Professor shoots him and then orders his men to kill the rulers' guards.

The Doctor and Ben discover the wounded Thous. Taking him to safety they meet up with Jacko and Sean. The Doctor decides that the only way to stop Zaroff is to flood the lower levels of Atlantis. He tells Jacko and Sean to warn the Atlanteans.

Zaroff orders his guards to force the workers who have left in search of food back to their posts. Ben and the Doctor manage to trick their way past the guards and into the generating station. They sabotage the generator and then head for Zaroff's lab. Jamie and Polly are also searching the tunnels for the lab but are trapped when the sea walls start to collapse and allow the water in. Sean and Damon carry the frail Thous toward the surface. The Doctor and Ben enter the lab and tell Zaroff's technicians his true intent, causing them to flee. Zaroff tries to keep the Doctor away by dropping a metal grille between them, but the Doctor uses the grille to cut him off from the controls that would cause the world's destruction. Ben and the Doctor rush out, leaving Zaroff to drown.

Jamie and Polly have managed to make their way to the surface along with Damon, Thous and Ara. Damon vows to build a new Atlantis without false gods or fish people. The Doctor and Ben arrive and the travellers return to the TARDIS. Jacko and Sean spot the police box and are amazed when it vanishes.

The Doctor sets the co-ordinates for Mars but the ship is suddenly gripped by a violent force and goes out of control. 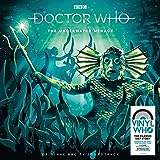 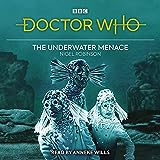