Strange lights in the sky are witnessed by a young girl called Elizabeth (Valerie Fyfer) from the window of a 17th-century manor house. She tells Squire John (John Savident), Charles (Anthony Calf) and their servant Ralph (John Baker) what she has seen. Subsequently all the houses occupants are killed by a mysterious alien intruder.

The TARDIS is behaving erratically and the Doctor blames the fault on the lateral balance cones. He tries to return Tegan to Heathrow in 1981, half an hour before she first entered the TARDIS, but although the ship arrives at the right location it is some 300 years too early. Villagers are burning potassium and sulphur in the woods to ward off the plague. The Doctor, Tegan, Adric and Nyssa meet up with Richard Mace (Michael Robbins), an unemployed actor, who leads them to the safety of a barn. The Doctor notices an ornament made from polygrite around Maces neck and recognises it as part of an alien bracelet from a prison planet. When Mace speaks of a comet falling to Earth a few weeks earlier, the Doctor surmises that this might have been a spaceship crashing and that there might be survivors. Lending weight to his theory, Nyssa finds some power packs in the barn.

The barn is owned by Squire John, and Mace takes the travellers to the Squires house. The place is deserted, so they decide to have a look around. The Doctor finds a laser mark on a wall by some stairs, but the base of the staircase is apparently blocked by another wall. The Doctor realises that the latter is in fact an energy barrier, and he breaches it. He recognises the smell of soliton gas. The travellers are surprised by an android (Peter Van Dissel), which renders Tegan and Adric unconscious. The Doctor, Nyssa and Mace manage to escape.

The android takes Adric and Tegan to its master, a Terileptil (Michael Melia). The Terileptil questions them.

The Doctor suggests that a sonic booster and frequency modulator might vibrate the android to pieces. Meanwhile the Terileptil orders the local poacher (Neil West) and a group of villagers, all of whom are enslaved to his will by control bracelets worn on their wrists, to capture the Doctor and find the TARDIS.

Mace, Nyssa and the Doctor locate the crashed space shuttle. Its internal lighting is powered by vintaric crystals and still operates. Under attack from the controlled poacher, axeman and wood collector, they escape. Nyssa returns to the TARDIS to construct the sonic device with which to attack the android. The Doctor and Mace meanwhile go to see the miller (James Charlton). He is also under Terileptil control, however, and the two friends are captured by the villagers and held in the barn.

The Terileptil fits Tegan with a control bracelet, but Adric escapes and heads for the TARDIS. The Terileptil then sends the android to get the Doctor and Mace, and they are brought to the Squires house. The Terileptil reveals that he and the others in his group are escapees from the tinclavic mines on the planet Raaga. Terileptil law states that imprisonment on Raaga is for life, so the Doctor cannot return them home. Their ship was badly damaged in an asteroid storm, and all but four of them perished in the crash. One of the four who survived has also since died. The Terileptil leader now plans to try to wipe out humanity.

The Doctor and Mace are put in a cell. When the Doctor checks through his pockets to try to find a means of escape, the Terileptil catches him and destroys the sonic screwdriver. The Terileptil then reveals that he plans to infect black rats with a genetically-engineered plague, intended to augment the Black Death that is already spreading across the country. When the Terileptil has gone, the Doctor rescues Tegan and Mace. They are unable to return to the TARDIS, however, as they find that all the exits from the house are sealed.

Nyssa has meanwhile completed the sonic device, which proves its effectiveness after Adric inadvertently allows the android access to the TARDIS. Adric then pilots the ship to the house and rescues the Doctors party. They then all go to London, following a trail of electrical emissions from the Terileptils equipment.

The travellers discover the Terileptil leader and the other surviving Terileptils (Michael Leader, David Summer) in their base in a small bakery. Mace despatches one of the creatures but, in the struggle, a flaming torch sets fire to the shop. The Terileptil leaders gun explodes in the heat and the remaining two Terileptils perish in the blaze. The Doctor, Mace, Tegan, Nyssa and Adric throw the plague serum into the fire. The Doctor then gives Mace, as a keepsake, the control chip that he removed from the Terileptil equipment at the house.

The time travellers leave as the fire rages on. As the TARDIS dematerialises, a street sign reveals that the bakery is situated in Pudding Lane. 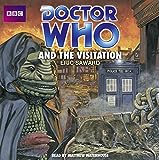 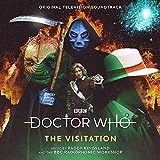 Doctor Who: The Visitation (Special Edition)
$16.87 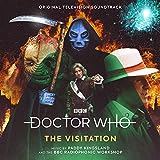