The Wheel In Space

Jamie is upset by Victoria's decision to remain on Earth and the Doctor tries to cheer him up but Jamie isn't interested. They land but the Doctor has difficulty in getting the scanner to show what is outside the ship as the image keeps changing. The Doctor realises that the TARDIS is trying to warn that they have landed somewhere dangerous and that they should leave. Before the Doctor can operate the controls the ship's fluid links overheat and mercury vapour floods the room.

The Doctor and Jamie leave the TARDIS via an emergency exit out of the back of the Police Box shell and the Doctor takes the ship's time vector generator with him which causes the TARDIS' internal dimensions to revert to those of the outer shell. They find themselves in a small deserted spaceship. They are unable to find any mercury to refill the fluid link and the Doctor decides that after a rest they will try and get into a control room which is locked.

While Jamie rests in the crew room, the Doctor wanders off. When the spaceship suddenly changes course, the Doctor is thrown off balance and bangs his head. Jamie helps the Doctor back to the crew room but they are attacked by a servo robot (Freddie Foote) which Jamie disables with the time vector generator.

The spaceship is picked up on the monitors of a nearby space station known as the wheel and identified as the Silver Carrier, a supply ship which has been missing for nine weeks and which is eighty million miles off-course. The station's commander, Jarvis Bennett (Michael Turner), is concerned that the drifting ship may prove to be a danger to the wheel and orders its destruction using the station's x-ray laser.

Leo Ryan (Eric Flynn) prepares the laser, much to the horror of Tanya Lernov (Clare Jenkins) who believes the controller is acting like a child with a new toy. Dr Gemma Corwyn (Anne Riddler) argues against destroying the ship as they do not know what has befallen the crew, but Bennett is adamant that the crew must be dead. Just before the laser is fired, Jamie is able to signal the wheel by using the time vector generator to create a pattern of static on the station's speakers.

Jamie and the unconscious Doctor are rescued. Dr Corwyn checks the Doctor's medical condition and confirms that he is suffering from concussion. Jamie tells Corwyn his name and gives the Doctor's as Dr John Smith (which he reads off a microscope). Jamie is unable to explain their presence on the Silver Carrier so Corwyn asks the wheel's librarian Zoe Heriot (Wendy Padbury) to show the young man around the station and to observe him discreetly.

Outside, several small white bubbles emerge from the Silver Carrier and attach themselves to the surface of the wheel.

Corwyn reports to Bennett. She believes Jamie is lying about how he and his friend came to be on the Silver Carrier and about the Doctor's real name. Bennett is becoming paranoid about the strangers and orders the destruction of the Silver Carrier. Jamie is shocked to learn that he and the Doctor were moments from death and that the TARDIS looks set for destruction along with the Silver Carrier. Whilst preparations to fire the laser are made, Jamie slips away. When Bennett notices Jamie's absence he sends Bill Duggan (Kenneth Watson) to find him.

In a hold on board the Silver Carrier two larger versions of the bubbles are moving. A metallic fist suddenly bursts through the outer membrane and a Cyberman emerges.

Jamie sabotages the laser by spraying liquid plastic into the unit. He is caught by Duggan. Zoe calculates that a nearby star will go nova in a matter of hours which will send meteorites hurtling towards them, and that they will be defenceless without the laser.

The now-active Cybermen monitor the progress of the Cybermats - sent to the wheel in the small white bubbles - as they destroy the wheel's supply of bernalium, a metal vital to the function of the laser. They know the humans will detect stocks of bernalium aboard the Silver Carrier and come to investigate.

Duggan discovers the Cybermats but doesn't report the sighting until he finds the bernalium destroyed. A technician, Rudkin (Kevork Malikyan), is attacked and killed by the Cybermats but not before he manages to cover one of them with liquid plastic. Zoe and the recovered Doctor use an x-ray machine to see inside the hardened plastic and the Doctor realises that the Cybermen must be aboard the Silver Carrier.

Laleham (Michael Goldie) and Vallance (Derrick Gilbert) have already space-walked over to the Silver Carrier, but they are taken prisoner by the Cybermen and hypnotised into smuggling the Cybermen onto the wheel inside crates of bernalium.

The Doctor tries to warn Bennett about the Cybermen but the controller will not listen. Gemma discusses her fears about Bennett's mental state with the Doctor. Bennett enters the medical centre and begins to talk to himself leaving his crew even more worried.

Duggan sends Chang (Peter Laird) to the loading bay to fetch some of the bernalium rods brought back from the Silver Carrier but Chang is killed by a Cybermen. Laleham and Vallance deliver the bernalium to Duggan in the laser control room. They question him about the repairs before he is hypnotised by the Cybermen who want the wheel's laser to be ready to destroy the meteorites.

The Doctor tells Gemma that he believes that the two men sent to the Silver Carrier are now under the Cybermen's control. Tanya uses the station's silenski capsules to see if anyone on the wheel is being controlled by an external influence. The machine registers as Duggan passes by and starts to attack the communications equipment in the operations centre. Leo shoots Duggan and kills him. The Doctor tells the crew to construct devices to block the Cybermen's control signals. He realises that the Cybermen must have an ulterior motive for capturing the wheel and tells Gemma and Leo to protect the oxygen room.

The humans, under the Doctor's direction, use high voltage current to destroy the Cybermats. The Cybermen have completed repairs to the x-ray laser and now order the final stage of the invasion of the wheel to begin. Bennett has completely withdrawn into himself and the Doctor tells Corwyn she must take command. Most of the crew have the metal signal blockers fitted to the back of their necks.

The meteorites approach the station and the crew get ready to use the repaired laser to destroy them. The Doctor realises that the time vector generator has been left on the Silver Carrier and sends Jamie and Zoe over to the ship to retrieve it.

The Cybermen gain access to the wheel's oxygen supply and attempt to convert the air to ozone. Gemma overhears their plan and warns the Doctor and Leo to switch over to the backup supplies, but she is killed. Zoe and Jamie space-walk to the Silver Carrier whilst Leo uses the laser to destroy the first wave of meteorites. There is no more power to destroy the second wave, however, so the Neutron Force Field is used instead which repels them away into space. Seemingly stirred into action by the sight of Gemma's dead body, Bennett leaves the safety of the control room.

Leo and the crew search for Bennett using the monitors and see him grapple with a Cyberman who kills him. On the Silver Carrier Jamie finds the time vector generator but Zoe has discovered a scanner relaying images from the Cybermen's control frequency. The Cyber Planner has realised that the plan to poison the air has failed and it orders Vallance to supply mental images of everyone on the wheel. When the Doctor's face appears the Planner orders his immediate death. Jamie and Zoe hurry back to warn the Doctor.

The Doctor has gone in search of spare parts and is cornered by the two Cybermen. They confirm the Doctor's theory that a Cyber-invasion fleet waits nearby to attack Earth but that they need the wheel to provide a radio beacon to the planet for their ships. The Doctor has set a trap for the Cybermen using electrical current which destroys one while the other retreats. Jamie and Zoe arrive with the vector generator and the Doctor ties it into the x-ray laser to increase its power.

One by one the hypnotised crew are released from the Cybermen's control but more Cybermen are space-walking across to the wheel from their ship. The Doctor completes his modifications to the laser which Leo fires destroying the Cybermen's ship. As the Cybermen try and break into the cargo bay, Jamie and Flanagan destroy the remaining Cyberman by spraying plastic onto its chest unit, and then repel the approaching Cybermen into space using the Neutron Force Field.

Inside the TARDIS the Doctor has replaced the lost mercury and he and Jamie are ready to leave. Before they do they discover Zoe hiding onboard. She wants to join them, but the Doctor warns her that she should know something about the dangers she may face. He uses a thought visualiser to show her his last encounter with the Daleks. 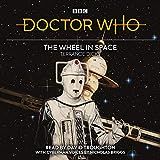