A conspirator on Gallifrey informs his unknown master that he has made his selection. Because of time, present location and personality, the Doctor has been chosen. The unknown master is pleased with the choice. A physical imprint of bonding is required, and the creature intends to obtain it.

The Doctor is completing some repairs to the TARDIS  adding an audio link on the scanner  when an ethereal force invades the TARDIS. The unknown creature appears to merge with the Doctor, much to Nyssas consternation. The Doctor and Nyssa realise that they are near Rondel, the location of a collapsed Q-star which shields anti-matter. This area is otherwise known as the Arc of Infinity.

On Gallifrey, the High Council of Time Lords  President Borusa (Leonard Sachs), The Castellan (Paul Jerricho), Cardinal Zorac (Max Harvey), Chancellor Thalia (Elspet Grey) and Councillor Hedin (Michael Gough)  are told of the recent events. An anti-matter creature has tried to bond with the Doctor. It has partially succeeded and so is still in this universe. Borusa checks with the Matrix but cannot supply any further information. The High Council order the Doctors TARDIS brought to the security area on Gallifrey. Commander Maxil (Colin Baker) requests sole access to the ship.

On board the TARDIS, the Doctor notices that the ship has changed course and comments that the recall circuit has been used only twice before.

On Earth, meanwhile, Tegan arrives at Schipol Airport in Amsterdam at 10.59 a.m. to meet up with her cousin Colin. She is instead met by Robin who tells her that Colin is missing.

Borusa sentences the Doctor to death to prevent the anti-matter creature from fully bonding with him. Damon (Neil Daglish), a worker in the computer centre whose colleague Talor (John D. Collins) has been killed by the traitor, is suspicious of the Castellan. He and Nyssa approach Councillor Hedin to see if he can help. The Doctor later manages to ask Damon  an old friend of his  if he can get another space/time element for the TARDIS, and Damon builds one.

The Doctor is placed in the termination machine even as the anti-matter creature prepares to bond with him. At the moment of termination, the creature appears in the Doctors place. The Doctor finds himself floating in the space-time dimension of the Matrix, where he finally meets the creature  it is Omega (Ian Collier).

Commander Maxil finds that the termination was rigged and that it did not complete. He advises the Castellan, who determines to locate the Doctor.

Robin and Tegan find Colin in a trance-like daze in the crypt, tending some alien equipment. Tegan and Robin are captured by the alien creature that earlier attacked Colin. It fires the gun device at them, causing them to vanish. They come round inside Omegas TARDIS, where the creature  the Ergon  scans Tegan for future use. In this way Omega discovers that she knows the Doctor. He then uses her to warn the Doctor off interfering with his plans. The Doctor soon reappears in the termination machine on Gallifrey. The Castellan discovers the identity of the Gallifreyan traitor, and summons the High Council to reveal all.

It is revealed that the Lord Presidents codes were used to access the Doctors bio-scan and also to transmit to Earth a fusion booster element which can convert water into power. However, it is not the President who is the traitor: it is Hedin.

Hedin wants the President to isolate the Matrix and threatens him with a gun. The Doctor and Nyssa enter and Hedin reveals that the threat is Omega. The Castellan then arrives and shoots Hedin down. The Doctor asks that the Matrix be shut down, but he is too late  Omega appears on the Matrix screen.

The Doctor enters the Matrix and obtains from Tegan some clues as to the location of Omegas TARDIS: JHC  Holland  Amsterdam. The Doctor and Nyssa leave in the Doctors TARDIS, a pulse loop being used to allow them to go undetected. The Doctor builds a device to knock Omegas fusion booster out of phase.

The Doctor arrives with Nyssa in Amsterdam and finds JHC in the telephone directory  it is a youth hostel chain. He has no money and so cannot telephone the hostels; the only option is to check them all on foot.

Omegas power meanwhile continues to build until he has enough to achieve a transference. His head starts to melt. The Doctor discovers from a hostel receptionist (Maya Woolfe) that Tegan is at Frankendahl, and he and Nyssa rush there. He realises that Omega is in Amsterdam because it is below sea level and this maintains the water pressure for the fusion generator. The Ergon tries to prevent the Doctor and Nyssa from entering Omegas TARDIS but Nyssa uses its own gun to make it vanish. The Doctor explains that it was a psycho-synthesis being. The Doctor attaches his device to the fusion generator.

Omega is dissolving, but when the fusion generator explodes he is unscathed. He reveals his face, which is now identical to the Doctors, and then leaves the crypt. The Doctor takes the Ergons gun  a matter converter  as he cannot destroy Omega without it. Outside, Omega (Peter Davison) has killed a gardener and taken his clothes.

Eventually cornered, Omega taunts the Time Lord that he lacks the courage to kill him. He then wills his own destruction, but the Doctor fires the matter converter at him and he fades away.

Back on Gallifrey, Damon reports that the anti-matter has gone. Omega has been destroyed. 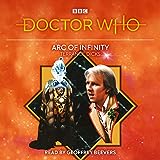