Speedbird Concorde 192 from New York vanishes on its approach to London Heathrow.

Having returned the crew of the freighter to their own time and with the Cyberman fleet dispersed, the Doctor heads for Earth in 1851, hoping to visit the Great Exhibition in Hyde Park. Due to spatial convergence, however, he has to materialise more quickly than intended and finds that the ship is on the same flight path as the vanished Concorde. He activates the co-ordinate override and the TARDIS appears on the concourse at Terminal 1, Heathrow. When the airport police arrive, the Time Lord suggests that they speak to Department C19  and specifically to Sir John Sudbury of UNIT. When they do this, they are given instructions to brief the Doctor on the disappearing plane.

The TARDIS is loaded onto another Concorde, which is crewed by Captain Stapley (Richard Easton), First Officer Bilton (Michael Cashman) and Flight Engineer Scobie (Keith Drinkel). The plane takes off on the same flight path as the first one, and it too vanishes from the skies. On board, the occupants at first notice nothing wrong as the plane apparently arrives back at Heathrow. Then Nyssa sees decaying corpses. They all concentrate and, breaking the perception induction, find that they are actually in a different time zone, around the Pleistocene era, 140 million years ago. Tegan sees the other Concorde in the distance and sets off for it.

Events are being controlled by a being called Kalid, who resembles an oriental sorcerer. He calls into being Plasmatons (Martin Grant, Chris Holmes, Mykel Mills, Nigel Tisdall, Giles Melville)  protein agglomerates made from the atmosphere  to restrain the Doctor and to bring Bilton and Scobie to him. The TARDIS is carried off by a group of hallucinating passengers from the first Concorde.

From within a Plasmaton bubble cocoon, the Doctor hears someone calling for help. The cocoon then vanishes and the Doctor, Nyssa, Tegan and Stapley meet Professor Hayter (Nigel Stock), a passenger from the first plane who is able to resist the hallucinations. They all head for a citadel-like building in the distance. Nyssa is overcome and possessed by some force which speaks to her (Andre Winterton) and tries to warn the group off. Kalid sends another cocoon to prevent Nyssa from talking.

Having reached the citadel, Stapley and Hayter try to free the other passengers from their hypnotically-induced hallucinations. The Doctor finds the TARDIS and meets Kalid. Nyssa, freed from the cocoon when Kalid redirects the force to stop Stapley and Hayter, is prompted to find the centre of the citadel. With Tegan, she penetrates the structure and enters the inner sanctum, even though Kalid throws up a number of images  Adric (Matthew Waterhouse), the Melkur (Graham Cole) and a Terileptil (Chris Bradshaw)  to try to dissuade them from going on. Kalid threatens the Doctor with a conjured snake creature, but Nyssa throws a rock at the centre of the sanctum and thereby causes the power to drain away. Kalid is revealed to be the Master (Anthony Ainley). He escaped from Castrovalva and has since used components from his TARDIS to build a focusing device and capture the Concordes.

The Master removes components both from Kalids control sphere and from the Doctors TARDIS, unaware that Stapley has interfered with the latter after realising what he was doing. He sends Stapley and Scobie off in the Doctors TARDIS on their own.

The passengers are trying to break into the inner sanctum from outside. When they succeed, the Doctor and Hayter enter. Within stands a sarcophagus containing an intelligence at the centre of a psychic vortex. Hayter finds some miniaturised figures and the Doctor identifies them as Xeraphin, creatures whose planet Xeriphas was devastated by the Vardon-Kosnax war. The Time Lord realises that the entire Xeraphin race is a single organism and that the Master intends to use this as a dynamorphic generator in his TARDIS.

Two Xeraphin creatures materialise by taking power first from Nyssa and then from Hayter. One of them, Anithon (Hugh Hayes), is good, but the other, Zarak (Andre Winterton), is evil. Anithon explains that the Xeraphin travelled to Earth but had radiation sickness. They collected together into a single entity to wait for the sickness to pass, but the Master arrived at the moment of their regeneration and destroyed the first of the new race of Xeraphin. He then contacted the base element of the race and caused them to became divided. The evil side intends to take over the universe and now tries to call forth other evil Xeraphin. Tegan, Nyssa and the Doctor will the dark Xeraphin not to appear, and they are successful. Hayter, however, has apparently been killed, absorbed into the Xeraphin. Suddenly the sarcophagus vanishes. The Master has completed his induction loop and transferred the Xeraphin to the centre of his TARDIS.

Hayter appears in the Doctors TARDIS and pilots it back to the sanctum before vanishing again. The Doctor picks up Bilton and they all return to their Concorde. Stapley prepares the plane for take-off while Tegan and the Doctor check that the Master has taken everyone else with him. The Doctor explains that the other Concorde is in fact the Masters TARDIS, which has been materialised around the crashed plane. However, due to Stapleys fiddling with the components taken from the Doctors ship, the Master is now trapped.

The Doctor bargains with the Master, offering him a temporal limiter in return for the freedom of the passengers and the return of his own components. The Master agrees, and the exchange is made. The Master then leaves in his TARDIS, but the Doctor assures the others that their adversary will arrive after they do owing to the way the limiter is programmed.

The Concorde arrives safely back at Heathrow, as does the Doctors TARDIS. The Masters TARDIS cannot materialise as the Doctors is already occupying the co-ordinates for which it is programmed. It is knocked back into space to the planet Xeriphas, where the Doctor hopes that the Master will stay for good.

To avoid awkward questions, the Doctor and Nyssa quickly leave in the TARDIS. Tegan, however, arrives back from a nostalgic wander round the airport terminal just too late to go with them. 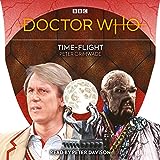 Doctor Who: The Matt Smith Collection
£25.85