Brotherhood of the Daleks


The TARDIS materialises. Despite console readings to the contrary, the Sixth Doctor and Charley step out, unexpectedly, into an alien jungle, where they find themselves stalked and then ambushed. They have landed in the middle of one of the Dalek wars, and this time the tactics used by both sides are threatening the very nature of reality. 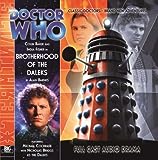