Philip Hinchcliffe, acclaimed producer of Doctor Who (1975-77) returns to tell new stories for the Fourth Doctor and Leela.

"The starting point was there were a few basic ideas that were kicking around for another series, had we made it," says Philip. "I thought this project would be fun to be involved with, and I've tried to and tell stories that are in the same spirit as the ones Robert Holmes and I were telling."

On the jungle planet Garros, Earth Forces Knight Commander-in-Chief Greg Saraton and his team are hunting gigantic beasts, for sport. When the Doctor and Leela arrive, they are caught up in a web of intrigue where there is no clear friend or foe.

Philip Hinchcliffe Presents: The Ghosts of Gralstead / The Devil's Armada (Doctor Who: The Fourth Do
$89.99 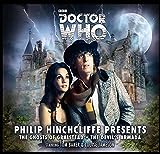