The Resurrection Of Mars


Deimos, moon of Mars – where Lord Slaadek's plans to revive the ancient Ice Warrior civilisation hang by a thread. Only the Doctor can stop him… but an old enemy, hiding in the catacombs, has an alternative plan. A plan that will test the Doctor's heroism to its limits. Just how far will the Doctor go to prevent the destruction and resurrection of Mars – on a day when his friends become enemies, and his enemies have right on their side? 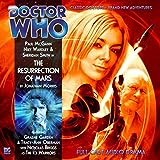