Genesis of the Daleks

The Time Lords intercept the transmat beam and unceremoniously dump the Doctor, Sarah and Harry in what appears to be a quarry in a battle zone. A lone Time Lord emissary explains to the Doctor that they have decided the time has come to do something about the Daleks. They would like him to prevent their development or change it so that they become less aggressive and less of a threat to the future of the universe. The Doctor reluctantly agrees - what choice does he have? - and learns that the battlefield on which they have arrived is on Skaro, just before the Daleks are due to be created.

The Doctor and Harry are captured by the Kaleds, a humanoid race engaged in a thousand year war with the Thals, by whom Sarah is taken prisoner. The Doctor meets the Kaleds' chief scientist, Davros, who has been crippled and confined to a wheelchair and mobile life support system which looks suspiciously like the base of a Dalek.

Davros has been experimenting with genetic mutations to try and discover what the final mutated outcome will be of all the chemical and radiation weapons which have devastated the planet. Knowing this form, he devises a protective casing in which the last survivors of the Kaled race will live, thus ensuring his race's continuation. What he designs is a mark three travel machine, recognised instantly by the Doctor and Sarah as a Dalek.

Unfortunately Davros is not only a genius, he is also insane and plots with the leaders of the Thals to ensure that his work is not discontinued. The result is that the Dalek machines are activated with Davros's mutants inside them and the killing begins.

What Davros has done is to ensure that his mutants have an overriding instinct to survive, resulting in a totally ruthless life form which sees all other creatures as a potential threat to itself. The Daleks intend to survive by systematically destroying all life which is not Dalek. This begins with the destruction of most of the Thals but soon moves to include the Kaled Elite Scientific Corps and ultimately Davros himself.

Against this show of power and ruthlessness the Doctor is impotent. He gets the opportunity to destroy the creatures but finds himself unable to take the ultimate step. What gives him the right to wipe out a race of intelligent creatures? Ultimately the decision is taken from him and although he later changes his mind and tries to destroy the incubator room (a task ultimately and inadvertently performed by a Dalek), his intervention means only that the Dalek menace is contained underground for longer than it otherwise would have been.

With the Doctor having achieved as much as he can, the travellers grasp hold of a Time Ring given to them by the Time Lord at the start of the adventure. The ring whisks them off through time and space. 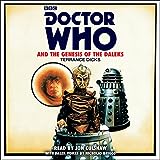 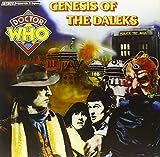 Genesis of the Daleks (Part 2)
Not Availa

Doctor Who and the Genesis of the Daleks
£4.99

Genesis of the Daleks (Part 1)
Not Availa