Revenge of the Cybermen

Instead of returning them to the TARDIS, the Time Ring takes the travellers back to the Ark, but many thousands of years earlier to the 29th century, to a time when it was Nerva Beacon warning space traffic of the existence of a new moon, Neo Phobos, circling Jupiter. This is actually the remains of Voga, nicknamed the planet of gold as that metal can be found there in abundance.

Rather than sit and wait for the TARDIS to turn up - it is travelling back in time to meet them - the Doctor decides to explore, and finds that the beacon has fallen victim to a space plague spread by Cybermats which has killed all but a handful of the humans on board.

It transpires that one of the humans, Kellman, is a traitor working with a small band of Cybermen to invade and destroy Voga, ensuring the removal of a major supply of gold - a metal which is lethal to the Cybermen as in the form of dust it coats their chest units and suffocates them.

The Cybermen invade the beacon and force the remaining humans - Commander Stevenson and Lester - to carry down into the heart of Voga Cyberbombs which will then be detonated to destroy the planet. What the Cybermen don't know is that Kellman is a double-agent, secretly working with one faction of the Vogans on the planet below, the Guardians led by Vorus. Their plan is to lure the Cybermen to the beacon so that the Vogans can launch a missile at it.

The Doctor manages to rid himself of the bomb he has been forced to carry, and prevents the missile from hitting the beacon, which has by now been abandoned by the Cybermen. He then destroys the fleeing Cybermen by giving instructions to aim the missile at their ship instead.

The TARDIS conveniently arrives as the panic subsides and the Doctor, Sarah and Harry slip away, en route to meet the Brigadier who has sent an urgent space/time telegraph message to the Doctor requesting his assistance with a problem on Earth. 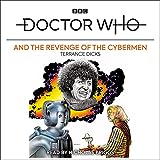