The TARDIS arrives in a laboratory-cum-playroom in a mysterious old house. The Doctor tells Ace that their location is a surprise. Ace hopes that the house isnt haunted as she hates haunted houses  shes been in one already.

The housekeeper Mrs Grose (Brenda Kempner) meanwhile lets in the Reverend Earnest Matthews (John Nettleton) at the front door. He has come to see Josiah Smith, the owner. Grose leaves him to wait and, with the other day maids (Katy Jarrett, Sue Somerset), hurriedly departs from the house. The clocks strike six and the night maids (Vivienne Darke, Emma Darrell, Diana Frances, Fiona King) emerge from behind concealed panels in the hall, together with Mrs Pritchard (Sylvia Sims), head of the night staff. Josiah sends his ward Gwendoline (Katharine Schlesinger) to greet Matthews.

Ace and the Doctor find a snuff box on the floor in a hallway. It is radioactive. They then meet an explorer and big game hunter (Michael Cochrane), who is searching for Redvers Fenn-Cooper. The explorer sees the box as proof of Redvers presence and explains that he intends to save him from Josiah. He suddenly sees himself reflected in a window pane  and recognises this as the reflection of Redvers. Mrs Pritchard bursts in and takes Redvers away. Nimrod (Carl Forgione), a Neanderthal butler, invites the Doctor to join Matthews in the study.

In the study, Matthews assumes that the Doctor is Josiah and starts berating him for his scientific beliefs. The Doctor gives Nimrod the fang of a cave bear  a sign of knowledge  and the butler leaves to bring some tea. Ace goes with Gwendoline to get changed into something more suitable. Josiah (Ian Hogg) enters and the lights dim automatically. He is wearing dark glasses and is covered with dust.

Nimrod goes down to the cellar  revealed as being a stone spaceship  and kneels before a shape concealed behind a lighted panel. As he does so, however, he is knocked out by a creature that emerges from a previously locked cell.

Josiah is speaking to the Doctor when the telephone rings. He answers it, and a voice croaks I escape. Josiah reacts in horror but then composes himself and has Mrs Pritchard show Mr Matthews in to the room. Mrs Pritchard prepares a pad of ether as the two men talk, and uses it to knock Matthews out.

Ace realises that the Doctor has brought her to Gabriel Chase, a house in Perivale that she burnt down when she was thirteen years old as she sensed evil there. Furious with the Doctor for tricking her, she runs off. Josiah joins the Doctor and offers him five thousand pounds to rid him of the brute that is opposed to him. Ace meanwhile finds the lift and descends to the cellar, where she is attacked by two reptilian husk creatures (Keith Harvie, Jack Talbot), while a hoarse voice calls her Ratkin.

Gwendoline pulls open a specimen drawer to reveal the sleeping form of a policeman (Frank Windsor). She tells the Doctor that he is from Java.

Nimrod comes to Aces aid, but becomes agitated when she threatens to smash the lighted panel. He struggles with her and the panel is broken, sending him into shock. The Doctor arrives with Josiah and notes that there is something hibernating behind the panel. Josiah then obtains a gun and takes charge. He tells the Doctor and Ace to operate the controls to close down the ship, but they distract him. The creature in the cell orders the husks to release it. The two time travellers run, with Josiah, back to the lift. They eventually make it back to the ground floor. Josiahs skin is flaking  he has started evolving again  and he breaks the lift before ordering Mrs Pritchard to seal the house as dawn is approaching.

In the laboratory/playroom, Josiah offers a banana to Matthews, who is starting to turn into a monkey. Gwendoline then drugs Matthews with another chemical pad.

As dawn breaks, the Doctor wakes the sleeping policeman and Ace falls asleep.

Ace is eventually woken by Mrs Grose, who has brought her a large breakfast  although it is now around 5.00 p.m. Ace is to join the Doctor and the policeman in the drawing room. Mrs Grose hurries away.

Nimrod is still in a coma. The policeman, Inspector Mackenzie, is eating heartily and trying at the same time to conduct enquiries into the disappearance of the houses original owner Sir George Pritchard, which he started investigating in 1881.

The creature from the cell  Control (Sharon Duce)  leaves the cellar and listens at the door as the Doctor brings Nimrod out of his coma by shouting Light!. As Nimrod talks to the Doctor, Control goes to prepare for the return of Light. The Doctor has mended the lift and hopes that Control will bring something up from the cellar with it.

The Doctor sets the clock in the hall forward to 6.00 p.m. and, as it strikes, Mrs Pritchard and the night-staff emerge. Josiah also appears. He has shed another husk and now no longer needs to hide from the light. The Doctor refuses his request to stop the lift. The doors open and Control emerges. Suddenly a bright light bursts from the lift, followed by the unearthly figure of Light (John Hallam) himself. Ace comments that it is an angel, but the Doctor replies that it is just another life form; while it slept, its survey  Josiah  got out of control. Light kills one of the maids. He explains that he previously spent centuries cataloguing all life on Earth, but as soon as he finished it started to change and evolve. Control runs off. The Doctor tries to persuade Light to leave, but fails.

Josiah has plans for the British Empire and tells Gwendoline that it is time to send Ace to Java.

Control meets Redvers who tells her that she can achieve her ambition to be a real lady  she is evolving fast. The Doctor arrives and Control jumps out of a window. Redvers tells the Doctor that he is hunting the crowned Saxe-Coburg  the Queen of England.

Gwendoline attacks Ace, but Control climbs in through the window and comes to her rescue. Gwendolyn is left locked in the room but soon breaks down the door and heads off after Ace.

Light checks his calculations and cannot believe that he is still on Earth. He sees one of the maids and calls her to him. Later, Nimrod arrives to find that Light has dismantled the maid to see how she worked. Inspector Mackenzie enters, and Light kills him as well.

The Doctor finds Ace and Gwendoline fighting again. He shows Gwendoline a locket containing a photograph of her mother  Mrs Pritchard.

The Doctor, Ace, Redvers and Control join Josiah for dinner. The Doctor tells Ace not to have the soup. The Doctor shows Mrs Pritchard the locket and she leaves in tears to find her daughter.

Mrs Pritchard finds Gwendoline in a bedroom and they embrace. Light appears and turns them to stone so that they will never change again. Nimrod witnesses this and is horrified.

Redvers has an invitation to Buckingham Palace and now plans to take Control there instead of Josiah. Josiah is furious as he intended to use this opportunity to assassinate the Queen. Control burns the invitation and Ace breaks down, admitting that she burnt Gabriel Chase to the ground when she was thirteen.

Light arrives in the dining room. He has a solution to his problem. He was going to reduce all life to primordial soup  like Inspector Mackenzie, currently in the soup bowl  but now intends to destroy everything with a firestorm. That way his catalogue will be complete. The Doctor points out that Light is changing too and that his catalogue still has gaps: griffins, basilisks, dragons, slithy toves, bandersnatches and crowned Saxe-Coburgs to name a few. He cannot destroy all life before he has completed the catalogue.

Light, realising that everything is changing all the time, turns himself to stone. Nimrod points out that the firestorm program has already been activated. Everyone hurries to the stone spaceship, where Control takes charge of Josiah and orders him back. The heads of the husks explode and Josiah reverts to a basic creature, which Control then locks up in the cell: they have changed places. Redvers and Nimrod decide to take over Lights task of completing the catalogue and Control notes that the Doctor is not listed  and probably never will be. The spaceship leaves with Josiah, Control, Redvers and Nimrod on board.

The Doctor and Ace return upstairs as Light finally disperses. The Doctor notes that the house will remember these events  it is the reason that Ace burnt it down. 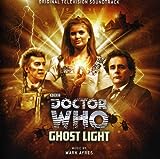