Alistair Gordon Lethbridge-Stewart (Nicholas Courtney) at a garden centre ; a sword with a glowing jewel in its handle ; a UNIT convoy transporting a nuclear missile ; Brigadier Bambera (Angela Bruce) unable to make contact with the convoy ; a witch looking on through a crystal ball ; and in the TARDIS, the Doctor receiving a distress signal from sideways in time, across the boundaries between worlds.

The TARDIS arrives in England in the near future and the Doctor and Ace hitch a lift from Peter Walmsley (James Ellis), site manager of the Carbury Trust conservation area  an archaeological dig by the shore of Lake Vortigern. The UNIT convoy has stopped at the dig and the Doctor and Ace discover that its systems have been blown by an energy pulse. Sergeant Zbrigniev (Robert Jezek) tells a sceptical Bambera about the Doctor and his ability to change his appearance and personality.

Several armoured knights (Mark Jardine, Martin Kennedy, Danny Lawrence) crash to Earth from space, and one of them finds the TARDIS. The knights start to fight amongst themselves.

Bambera gives the two time travellers a lift to the Gore Crow Hotel, where Ace befriends a young Chinese girl, Shou Yuing (Ling Tai). There is a scabbard hung on the wall of the hotel lounge and Elizabeth (June Bland), the hoteliers blind wife, senses something strange about it  as though it is waiting for something. Ace and Shou Yuing retire to the garden to talk about explosives.

The knights continue to clash. A grenade is thrown and one of the knights is blown up in the air and through the roof of a brewery behind the Hotel, startling Ace and Shou Yuing. The Doctor and the girls investigate and find the knight. He is Ancelyn (Marcus Gilbert), who greets the Doctor as Merlin. Bambera arrives, her car having been damaged in the fighting. Finally Mordred (Christopher Bown) enters, flanked by knights. The Doctor prevents Mordred and Ancelyn from fighting. Taking advantage of the fact that both believe him to be Merlin, he orders Mordred to leave. The knight complies, but tells the Doctor that his mother has waited twelve centuries to face him.

Lethbridge-Stewart has meanwhile been directed to go to London by UNIT commanders in Geneva. He orders that an exclusion zone to be placed around Carbury.

In an abandoned church, Mordred summons his mother, Morgaine (Jean Marsh). She appears and speaks to the Doctor through a mental link, warning him not to stand against her.

The next morning, Lethbridge-Stewart and Flight Lieutenant Lavel (Dorota Rae) leave London for Carbury by helicopter.

Morgaine is in a churchyard with her knights. She is honouring the dead. Seeing Lethbridge-Stewarts helicopter, she makes it crash. Lethbridge-Stewart is unharmed goes to fetch help for Lavel, who is injured. He encounters Morgaine but they part with mutual understanding. He then hurries to the Hotel and commandeers Shou Yuings car from her.

The Doctor and Ace follow the tunnel and eventually find themselves in a spacecraft under the lake. There they find the slumped, armour-clad figure of Arthur and a sword. Ace pulls the sword from its mounting and thereby inadvertently activates a defence mechanism that knocks the Doctor out. She then finds herself trapped in an airlock as it rapidly fills with water.

The Doctor recovers in time to free Ace from the airlock by opening the outer door. Ace swims up to the surface of the lake, where Walmsley and Ancelyn see her emerge carrying the sword. Lethbridge-Stewart, having arrived along with Shou Yuing, heads down the passage and rescues the Doctor.

Mordred is drinking at the hotel when Lavel enters and holds him at gun-point. Morgaine arrives and forces Lavel to lower her weapon and kneel at her feet. She then kills the woman by draining the knowledge from her mind. When the hotelier Pat (Noel Collins) complains, she disintegrates the body and pays for the drinks by restoring Elizabeths sight.

The Doctor, Ace, Shou Yuing, Bambera, Lethbridge-Stewart, Ancelyn and Walmsley all return to the hotel, trying to avoid Morgaines knights along the way. There, UNIT troops take steps to evacuate all the civilians. Major Husack (Paul Tomany) encounters resistance from Pat and Walmsley, but the Doctor convinces the two men that they wish to leave and they do so with no further problem. Lethbridge-Stewart has ordered up numerous weapons  and adds to the inventory, at the Doctors suggestion, silver bullets. He has also had Bessie, the Doctors yellow car, brought to the Hotel. The Doctor heads off for the missile convoy in order to prevent a battle there. He leaves Ace with some chalk, instructing her to draw a circle and stay inside it with the sword.

Elsewhere, Morgaine has been watching this exchange through her crystal ball. She summons the Destroyer (Marek Anton), a blue demon, and then transports herself to the hotel, where Ace and Shou Yuing cower in the circle. She attempts to obtain the sword by playing mental tricks on the young women and then, when this fails, threatens them with the Destroyer.

The Doctor manages to bring a temporary halt to the fighting at the convoy. Mordred is captured and reveals that the Destroyer has been summoned. The Doctor tries to get Morgaine to stop what she is doing by threatening Mordreds life but, to Mordreds horror, she is undeterred. Morgaine cannot touch the sword so long as it is in the chalk circle. The Doctor hurries back to the hotel, but there is a massive explosion as he arrives. Ace and Shou Yuing are unharmed, but Ace admits that she gave Morgaine the sword.

Ace has meanwhile realised that the Doctor may need the silver bullets. She jumps through the interstitial vortex after him and bumps into Morgaine, giving the Doctor a chance to grab the sword. Morgaine frees the Destroyer and regains the sword. She and Mordred, who has arrived from the battlefield, then fade away, while the Doctor and Ace beat a hasty retreat with Lethbridge-Stewart, who is unharmed.

Morgaine and Mordred have returned to the UNIT convoy, where they plan to fire the nuclear missile.

The Doctor and Ace revisit the spaceship. Ace replaces the sword in its mounting and the Doctor discovers that the suit of armour in which Arthur is supposedly held in suspended animation is empty but for a note  left for him by his own future self  explaining that Arthur died in the final battle and warning that Morgaine has taken control of the missile.

As Ancelyn and Mordred fight, the Doctor goes to stop Morgaine. He convinces her that to use the missile is dishonourable and she hits the abort button. The spacecraft explodes and the Doctor tells Morgaine that Arthur died many years ago. He then incapacitates Mordred and tells Lethbridge-Stewart to lock both Mordred and Morgaine up.

Later, back at Lethbridge-Stewarts house, the ladies head off for a drive in Bessie, leaving the men to do the gardening and cooking. 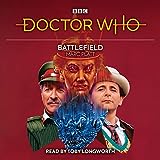