When Martha Jones finds herself on the moon, she meets a mysterious stranger called the Doctor, and her life will never be the same again. 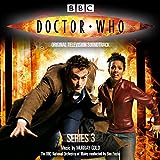