The twin worlds of Atrios and Zeos have been engaged in a long interplanetary war and the Marshal of Atrios is desperately seeking a means by which to win.

The Doctor, Romana and K-9 arrive on Atrios as the latest bombing raid by the Zeons comes to an end. They go in search of the sixth and final segment of the Key to Time. K-9 is lured into a metal recycling system and the Doctor has to go after him towards the furnace.

The Marshal is being controlled by someone else, and receives his orders from a skull-like communicator behind a two-way mirror. The Doctor makes his way to 'Zeos' and realises that it is not the opposing planet at all, but another, invisible planet, placed between the two, and known as the planet of evil or the third planet.

This world is ruled by the Shadow, who, with his servants the Mutes, is working for the Black Guardian to try and gain control of the final segment before the Doctor can find it.

The Shadow has captured Princess Astra of Atrios and is holding her under threat of torture in the belief that she can tell him where the segment is, but she does not know.

The Doctor finds that the war between Atrios and Zeos is being controlled from Zeos by a computer commandant called Mentalis, and that it is planning a final strike to counter the Marshal's similar plan. Mentalis was built by Drax, a Time Lord and old college friend of the Doctor's, who helps the Doctor to disable the computer before both worlds are destroyed.

To stop the Marshal, now on his way in a ship to deliver a final missile strike on Zeos, the Doctor builds a fake final segment for the Key to Time out of chronodyne, and in this form the Key has enough power to create a temporary time loop, trapping the Marshal and his ship.

The Doctor realises that Princess Astra is herself the sixth segment and the Shadow converts her into the crystal. The Doctor snatches this from under the Shadow's nose and escapes to the TARDIS where he assembles the complete Key.

The White Guardian appears on the TARDIS scanner and congratulates the Doctor on a job well done. He is now to hand over the Key. The Doctor, realising that this is a deception and also that the Key is too powerful for any one being to control, orders it to re-disperse itself, much to the chagrin of the 'White' Guardian who in his rage reverts to his true colour - Black. The raging Guardian swears that the Doctor will die for this. To try and shake him off the Doctor fits a randomiser to the TARDIS controls - he now has no idea where or when his travels will take him. 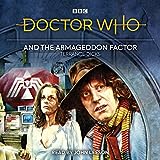