The Dalek Invasion of Earth

The TARDIS materialises in 22nd-century London, where the travellers discover that the Earth is now ruled by the Daleks (Robert Jewell, Gerald Taylor, Nick Evans, Kevin Manser, Peter Murphy, Ken Tyllsen; voiced by Peter Hawkins and David Graham). The invaders have converted some humans into Robomen (Martyn Huntley, Peter Badger, Reg Tyler, Bill Moss) - zombie-like slaves - by clamping metal control helmets to their heads. Many others have been shipped to Bedfordshire to work in a vast mining complex that the Daleks have established there.

While Barbara and Susan meet up with a team of resistance fighters, led by the wheelchair-bound Dortmun (Alan Judd), the Doctor and Ian are captured by Robomen and taken to a Dalek saucer which has landed at the Chelsea Heliport. The Doctor is about to be turned into a Roboman when the resistance fighters, using ultimately ineffective bombs designed by Dortmun, stage an attack on the saucer and rescue him. He is subsequently reunited with Susan and meets David Campbell (Peter Fraser), a young man with whom she has become friendly.

Ian is still on board the Dalek saucer when it takes off. There he meets Larry Madison (Graham Rigby), who is hitching a lift to the Dalek mine in Bedfordshire in the hope of being reunited with his brother. Dortmun has meanwhile persuaded Barbara and a young resistance fighter named Jenny (Ann Davies) to travel with him to the Transport Museum, which is used as a safe house by the resistance group. His obsession with the success of his bombs eventually leads him to make a suicidal attack on a Dalek patrol, under cover of which Barbara and Jenny escape and head for Bedfordshire. The Doctor also makes his way to the Daleks' mine, accompanied by Susan, David and another resistance fighter named Tyler (Bernard Kay).

The travellers eventually learn that the purpose of the Daleks' mining operation is to remove the Earth's core using a powerful bomb and replace it with a drive system which will enable them to pilot the planet around the galaxy. On the Doctor's instructions, Susan and David use one of Dortmun's bombs to destroy the Daleks' communications network, temporarily immobilising them. The Doctor then orders the Robomen to turn on the invaders. Ian has meanwhile erected a barrier in the mine shaft and prevented the Daleks' bomb from falling into the bowels of the planet. Having cleared the area, the time travellers and their resistance friends watch as the Daleks and their mine are destroyed in the resulting explosion, which causes a spectacular volcanic eruption.

Realising that Susan has fallen in love with David, the Doctor locks the TARDIS doors against her and leaves her to begin a new life on Earth as he continues his travels with Ian and Barbara.

Doctor Who: The Dalek Invasion of Earth, World's End
Not Availa 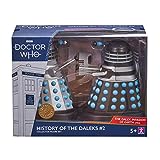 Doctor Who History of The Daleks #2 - The Dalek Invasion of Earth Collector Set - Dr Who Season 2 Da
£69.99

Doctor Who: The Dalek Invasion of Earth, Flashpoint
£1.89