The Tomb of the Cybermen

On the planet Telos an archaeological team led by Professor Parry (Aubrey Richards) uncover the doors to a lost Cyberman city. Kaftan (Shirley Cooklin) offers fifty pounds to the first man who can open the doors but the crewmember (Ray Grover) who tries is electrocuted.

The TARDIS arrives and the Doctor, Jamie and Victoria meet Parry's group. The Doctor tells Parry that he can open the doors and he proves that the doors are no longer electrified. The Doctor and Jamie are not strong enough, however, and so the Doctor coerces Kaftan's aide, Toberman (Roy Stewart), to pull them apart.

They enter the chamber beyond and begin to explore. The expedition's patron, Eric Klieg (George Pastell) and Kaftan conspire to find a discreet way of getting rid of the Doctor and his companions. The Doctor opens two doors out of the main chamber but a large hatchway leading down remains closed.

They split up to search further. John Viner (Cyril Shaps), Kaftan and Victoria find a room which they decide must have been used to revitalise dormant Cybermen. Meanwhile Jamie and Peter Haydon (Bernard Holley) discover a strange metallic insect that appears to be dead. Klieg and Parry puzzle over the mathematics behind operating the power systems of the city. The Doctor gives Klieg the solution but warns him not try it. Klieg takes no notice and activates the machinery. Power begins to hum through the complex.

In the revitalising room Victoria is standing inside a large Cyberman-shaped sarcophagus when the power comes on. Kaftan pulls a lever and the lid slams shut, trapping Victoria. Viner goes to fetch help. When he has gone, Kaftan pulls more switches but is stopped by the Doctor. The Doctor releases Victoria and takes her and Viner to check on Jamie and Haydon.

In the other room Haydon operates a control, the room darkens, and a large hypnotic pattern appears on one wall. He theorises that the room was used by the Cybermen for some kind of weapons testing and gets Jamie to operate the machine once more. The Doctor arrives but is too late to stop Jamie. A Cyberman appears in front of them and a weapon hidden in the wall fires, hitting Haydon in the back. The Doctor finds that the Cyberman is nothing more than a dummy. Victoria picks up the inert silver creature, which the Doctor identifies as a Cybermat, and puts it in her bag.

Back in the main chamber Parry and Klieg work on using the equations the Doctor gave them to discover how to open the hatch. Toberman enters from outside and informs Kaftan that he has carried out her orders. When the Doctor and the others return, Parry announces that he is abandoning the expedition. Captain Hopper (George Roubicek) arrives and informs them that the ship's fuel pumps have been sabotaged. They will need seventy-two hours to repair the damage.

The Doctor hints to Kaftan that he knows that it was Toberman who sabotaged the ship but at that moment Klieg announces he has worked out the final sequence. The hatch swings open and Kaftan and Victoria remain in the main chamber while the men descend. When they have gone Kaftan offers Victoria some food and drink - which she drugs. Victoria quickly falls asleep and Kaftan shuts the hatch.

The exploring archaeologists discover the frozen tombs of the Cybermen. They hear the hatch slam shut but Klieg plans to open it from the control panel in the tombs. Klieg throws several switches but the hatch stays shut. Slowly, the tombs begin to defrost and the Cybermen within begin to stir. Viner hurriedly throws the switches into reverse and the tomb re-freezes. Klieg shoots Viner and restarts the thawing process.

Victoria wakes up but Kaftan warns her at gun-point not to touch the controls. Unseen by Kaftan the Cybermat emerges from Victoria's bag and begins to move towards her. The creature jumps at Kaftan and she drops her gun. Victoria grabs the weapon and destroys the creature. With Kaftan unconscious Victoria unsuccessfully tries to open the hatch. She runs to the ship for help.

In the tombs Klieg explains that he is a member of the Brotherhood of Logicians, a group who seek to rule Earth by the rules of logic. He has come to Telos to discover the Cybermen's secrets to help the Brotherhood. The Cybermen emerge and release their Controller. The Controller tells the humans that they now belong to the Cybermen and will become like them. He reveals that the tombs are an elaborate trap to bring highly intelligent humanoids to Telos to be converted into Cybermen and thus re-build the Cyber race. The Cybermen know the Doctor from their attack on Earth's moonbase hundreds of years earlier. The Controller reveals that the survivors of their failed invasion of Earth came to Telos to await the arrival of more humans that they could convert.

Victoria returns with Hopper and First Officer Jim Callum (Clive Merrison) and they try to open the hatch. Kaftan comes to and retrieves her gun, holding them at bay. Victoria distracts her and Hopper grabs the gun. The hatch is opened and Hopper descends armed with some smoke bombs.

Hopper throws the bombs confusing the Cybermen and allowing everyone except Klieg and Toberman to escape. Toberman is taken away to be converted but Klieg manages to hide. When the coast is clear, he heads for the surface where he and Kaftan are locked in the weapons testing room.

The Controller orders the preparation and later the release of the Cybermats, which are sent through pipes into the chambers above the tombs. In the testing room Klieg and Kaftan remove an x-ray laser gun from the dummy Cyberman and plot to seize control. In the main chamber everyone but the Doctor and Victoria is sleeping. The Cybermats attack but the Doctor uses an electrified cable to create a magnetic field that disorientates and destroys the creatures.

Klieg enters the main chamber brandishing the laser. He believes that with his new weapon he can negotiate with the Cybermen. Kaftan opens the hatch and Klieg calls for the Controller.

Toberman disarms Klieg and the Controller opens the hatch to the tombs, killing Kaftan in the process. The Doctor pleads with Toberman to help them, and the sight of his dead mistress and the Doctor's words cause Toberman to attack and disable the Controller. The Doctor takes Toberman with him and re-enters the tomb hoping to re-freeze the remaining Cybermen. Klieg follows them down and starts the sequence to re-awaken the Cybermen. The Doctor mocks Klieg's ambitions of conquest and keeps him talking until he is suddenly attacked by a Cyberman and killed. Toberman grapples with the Cyberman and destroys it as the Doctor successfully re-freezes the tombs.

The Doctor plans to re-electrify the city doors after the others have left for their ship but the Controller recovers and tries to prevent the doors from closing. Toberman is stronger, however, and, as the doors shut, a powerful electric pulse kills him. The Controller is also apparently killed.

Doctor Who Revisitations 3 (The Tomb of the Cybermen/The Three Doctors/The Robots of Death) [DVD]
$25.74 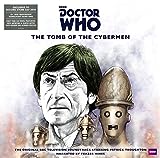