The TARDIS arrives in the Himalayas and the Doctor rummages through a chest looking for a bell. He tells Jamie and Victoria that this 'ghanta' will ensure them the welcome of a lifetime. The Doctor goes outside to look around and is delighted to see the fortified walls of the Detsen monastery nearby. As he returns to the TARDIS he discovers a fresh set of large footprints close to the ship.

The Doctor comes across the remains of a campsite. He examines the lifeless body of a man before picking up a rucksack and heading on to the monastery which at first sight appears deserted. The Doctor is in the courtyard when the gates open and the resident monks enter accompanied by Professor Travers (Jack Watling) who sees the rucksack the Doctor is carrying and accuses him of attacking him and murdering his companion, John (Reg Whitehead). The Doctor protests his innocence but Khrisong (Norman Jones) orders that he be taken away.

Jamie and Victoria arrive at the entrance to a narrow cave. Jamie goes inside but Victoria sees a large hairy creature lumbering towards them and goes to warn Jamie. They watch as the creature reaches the mouth of the cave, which it seals with a large boulder, trapping them.

The Doctor is visited by Travers who believes him to be a reporter. The Doctor tries to explain that he did not attack Travers and kill his companion. Travers replies that Khrisong will uncover the truth.

Khrisong, the chief warrior, is keen to kill the Doctor, blaming him for the sudden aggressiveness of the Yeti and the deaths of four monks. Sapan (Raymond Llewellyn) is unconvinced and suggests that they consult the Abbot Songsten (Charles Morgan). Khrisong is determined to prove the Doctor's guilt and orders that the traveller be brought to him.

Jamie searches the cave and at the back discovers a small pyramid of silver spheres. The monster unblocks and enters the cave but Jamie knocks away one of the props that supports the roof and rubble crashes down on the creature's head. Jamie and Victoria run down the mountain, chased by the unharmed monster.

The Doctor confides in a young monk called Thonmi (David Spenser) whom he tells about the ghanta that he has hidden in his cell. Khrisong has the Doctor tied to the doors of the monastery: if he is guilty the Yeti will rescue him; if he is innocent they will attack him. Thonmi takes the ghanta to Songsten who confirms that it is the same holy bell entrusted to a stranger in 1630. Songsten hears the voice of Padmasambhava (Wolfe Morris) who tells him that the Doctor is known to him and must be released. The voice goes on to express concern that the Doctor may interfere with the 'great plan'.

On their way to the monastery Jamie and Victoria meet Travers. He promises to return with them to clear the Doctor's name if the young friends will show him the cave. They hurry to the monastery. The Doctor is released as three Yeti approach and Jamie helps the monks capture one of the creatures. The Doctor discovers that it is in fact a robot which is now lifeless. There is a spherical hole in the robot's chest. Unnoticed by anyone, a silver sphere, knocked from the Yeti during its capture, starts to beep and move along the floor.

Victoria and Jamie tell the Doctor about the cave and the spheres. Victoria suggests that the sphere is the right size to be the Yeti's control unit. When they return to the courtyard there is no sign of the object. Ralpachan (David Baron) tells them that only Travers has entered the courtyard and he has now left the monastery despite Khrisong's orders. The sphere continues to make its way unseen through the monastery.

Rinchen (David Grey) has placed a spirit trap - a complicated pattern of threads - around the inert robot Yeti. Victoria questions Songsten about Padmasambhava and is told that he lives within the holy sanctum of the monastery where only the Abbot may enter. Victoria tries to gain entry but is stopped by Thonmi.

The Doctor convinces Khrisong of the importance of finding the sphere and the monk leaves to search outside. While he searches, an incredibly old man - Padmasambhava - moves small figurines of three Yeti across a map of the monastery and its surrounding hills. Outside in the dark, three full-size Yeti begin to lumber towards Detsen watched by a hidden Travers.

Padmasambhava tells Songsten that he is unable to control the Doctor's mind and that the traveller is endangering their plan. He orders Songsten to take a transparent pyramid to the cave in the mountains guarded by three Yeti. Once there, the Great Intelligence will use the device to focus itself upon the Earth where it will take on physical form.

On the mountainside Khrisong finds a silver globe but is attacked by the Yeti and injured. The Doctor rushes to his aid.

The Doctor believes that he may be able to trace the signals that control the Yeti robots, and he and Jamie set off for the TARDIS. Victoria is left to wait for their return. Whilst the monks are busy with their work and prayers Victoria decides to try once again to enter the sanctum.

Songsten hypnotises the guard and slips out into the night. Victoria approaches the inner sanctum but Padmasambhava's voice warns her that the monks will consider her presence in the sanctum as sacrilege and so she returns to the main hall. The sphere has also made its way to the hall and slots itself into the robot's chest. The creature comes to life and leaves despite the monks' attempts to stop it.

When the Doctor and Jamie reach the TARDIS they find a Yeti guarding it. They manage to remove its control unit and then enter the ship. Songsten reaches the cave and whilst he places the pyramid there, Padmasambhava asks the Great Intelligence to release him from its control. Travers has been watching the cave and enters it once Songsten and the Yeti have gone. He sees the glowing pyramid split open and a foam-like substance start spreading from it.

Khrisong has become suspicious of Victoria and locks her up, although she quickly escapes. Songsten arrives back at the monastery and once again uses hypnotism to avoid the guard. When the Doctor, Jamie and Travers arrive back at the monastery, Khrisong has all three locked up. Whilst in their cell Travers tells the others what he saw in the cave. Victoria is invited to enter the inner sanctum by Padmasambhava and she watches as the old man directs four Yeti into the monastery to attack the monks. In the battle that follows, Rinchen is killed.

Victoria appears before the monks carrying the ghanta and speaking with Padmasambhava's voice. She orders the monks to evacuate Detsen and to release the Doctor and the others. The Doctor is amazed that the three hundred year-old master is still alive and goes to see him. Padmasambhava tells the Doctor how he made contact with the Great Intelligence and how the alien is controlling him to further his plans on Earth. The old man appears to die but the Intelligence revives him after the Doctor has left.

Khrisong attempts to warn Songsten that Padmasambhava is controlling the Yeti but the controlled Abbot kills him. The Doctor and the other monks overpower Songsten and the Intelligence retreats from the Abbot's mind. The Doctor, Jamie, Victoria and Thonmi decide to remain while Travers and Ralpachan find their way blocked by the spreading foam when they try to reach the cave to destroy the pyramid within.

As the friends make their way back to the TARDIS accompanied by Professor Travers, the explorer sees a genuine Yeti and chases after it. 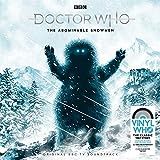 Doctor Who: The Abominable Snowmen [VINYL]
Not Availa