The second Doctor and Jamie  having left Victoria behind to study Graphology  visit Joinson Dastari (Laurence Payne), Head of Projects on space station Camera, Third Zone. On a mission for the Time Lords, they question him about the time travel experiments of Professors Kartz and Reimer. Whilst in Dastari's office they meet Chessene o' the Franzine Grig (Jacqueline Pearce), an Androgum. The Androgums are a race of voracious gourmands who serve as cooks and menials, but Chessene has been technologically augmented nine times by Dastari, giving her an increased intelligence.

Chessene has used her expanded intelligence to betray the scientists on the space station to the Sontarans. She has offered the commander of the ninth Sontaran Battle Group, Group Marshal Stike (Clinton Greyn), the KartzReimer time module to help his race in their continuing war against the Rutan Host. Chessene drugs the scientists on the space station with calgesic and sabotages the station's defences so that the Sontarans can raid it, killing almost everyone aboard and capturing the second Doctor, whom they intend to dissect in the hope of discovering the Time Lord secret of successful time travel.

One of Chessene's fellow Androgums, Shockeye o' the Quawncing Grig (John Stratton), suggests that the conspirators then head for Earth, where he might savour the delicacy of human flesh. Chessene agrees, as Stike has also suggested that planet  the Sontarans are planning an attack in the Madillon Cluster and Earth is within convenient range.

Chessene, Shockeye, Dastari, the second Doctor and Sontaran Major Varl (Tim Raynham) travel to Earth ahead of Stike and land four km from the Spanish city of Seville, where they occupy a large hacienda owned by an old lady, the Dona Arana (Aimee Delamain), who becomes Shockeye's first human victim. They set up their equipment unaware that their arrival has been observed by Oscar Botcherby (James Saxon), an unemployed English actor, and Anita (Carmen Gomez), his Spanish girlfriend, who were out collecting moths.

In the TARDIS, the sixth Doctor undergoes a strange fainting spell  caused by his second incarnation being tortured by the Sontarans  and decides to visit his old friend Dastari. Arriving at the space station, he and Peri discover the carnage left by the Sontarans twelve days earlier. It has been made to look as if the Time Lords were responsible for the attack, a scenario which the Doctor is reluctant to accept. The station computer (Laurence Payne) has its defences up, so the Doctor and Peri must find some way of getting into the control room and disabling it. They climb through the station's infrastructure, where Peri is attacked by a wild creature  which turns out to be Jamie, deranged after his narrow escape from the Sontarans' attack and his subsequent abandonment in isolation on the station  and the Doctor is temporarily stunned by a defensive blast of vorum gas.

Recovering, the Doctor hypnotises Jamie and, restoring his sanity, learns what really happened in the attack on the station. The Doctor then attempts to communicate telepathically with his second incarnation across space. He hears a tolling bell, identifies it as Santa Maria, the largest bell of the 25 in the Cathedral at Seville on Earth, and determines that his former self is about three miles away from it.

Materialising near to the hacienda, the sixth Doctor, Peri and Jamie meet Oscar and Anita, who assume that they are plain-clothes policemen. Oscar tells them what he and Anita have seen. The Doctor and his companions then attempt to rescue his other incarnation, who has been drugged with siralanomode, but each in turn is captured when Dastari, who had at first appeared to be a prisoner of Chessene, turns out to be a willing conspirator.

Eager to discover the secrets of the Time Lords' immunity to the dangers of time travel, Chessene threatens the Doctor's companions until the sixth Doctor is forced to reveal that all members of his race have a symbiotic print contained within their genes. In the hope that it will enable him to activate the Kartz-Reimer time module, which Stike has now brought to Earth in his ship, Dastari begins a series of operations on the second Doctor to discern this code. He is interrupted, however, as Chessene changes her plan: she now wants the second Doctor implanted with Androgum genes, to turn him into a consort for herself. When Dastari performs the first stage of this operation, the Doctor begins to transform into an Androgum with a huge appetite.

Chessene has intended all along to double-cross the Sontarans, and she attacks them with coronic acid. Varl is killed but a wounded Stike, mistakenly believing the briode-nebuliser within the KartzReimer module to have been primed by the Doctor's Rassilon Imprimatur, attempts to use the device to rejoin his troops in battle. He is badly injured as a result of this and tries to return to his ship, but it has been set to self-destruct by Varl and he is killed in the blast. The sixth Doctor, Peri and Jamie escape from the hacienda and follow the second Doctor and Shockeye into Seville, where they have gone to find a restaurant in which to sate their gargantuan appetites.

Chessene and Dastari are also searching Seville for the Androgums, but the sixth Doctor finds them first as he is led to the restaurant by virtue of the effect which the alien genes in his former body are beginning to have on him. The restaurant, Las Cadenas, is being run by Oscar, who is stabbed to death by Shockeye when he won't accept a twenty narg note in payment for the meal. The second Doctor collapses at the table, his body finally rejecting the Androgum genes as Dastari has not been able to perform the stabilising operation. As they leave the restaurant, both Doctors, Peri and Jamie are recaptured by Chessene and Dastari.

Back at the hacienda, the sixth Doctor tricks Chessene into believing that the briode-nebuliser has been correctly primed. He then attempts to escape, but is pursued by a cleaver-wielding Shockeye. He is forced to kill his attacker, using a cyanide-soaked pad from Oscar's moth-collecting kit, which he finds by a tree. Dastari releases the second Doctor, Peri and Jamie, but Chessene kills Dastari as her bestial nature resurfaces. She then attempts to escape in the time module and is herself killed by molecular disintegration.

The now-recovered second Doctor summons his TARDIS with a Stattenheim remote control and he and Jamie depart. The sixth Doctor and Peri are left to consider the merits of becoming vegetarians. 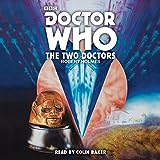 The Two Doctors (Part 3)
Not Availa

The Two Doctors (Part 2)
Not Availa