Arriving in the North of England in the late 1980s, Ace and Hex seek refuge at the home of Albert and Peggy Marsden... in the last few hours before the outbreak of World War Three. 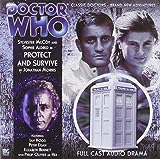